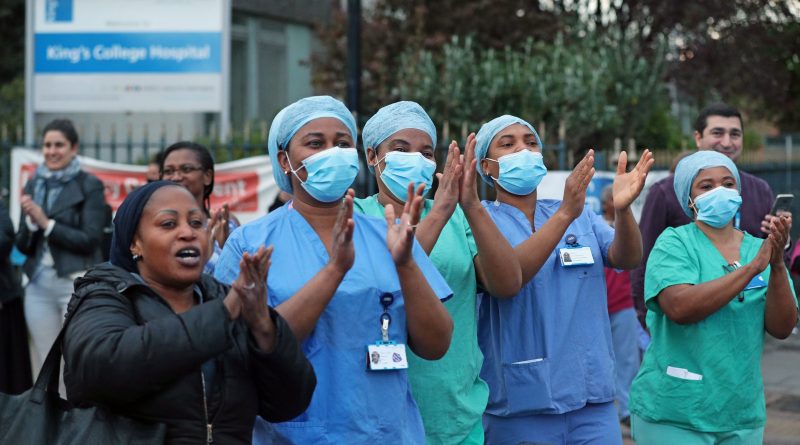 A father-of-two has been backed by 100,000 people in his call for NHS and key workers to be recognised annually with a national day celebrating their work.

Anthony Francis, from Catford, wants an NHS and Key Workers Day next March 26 – the anniversary of the first #ClapForOurCarers.

Mr Francis, 57, also has the backing of his MP, Janet Daby – against whom he fought a council election eight years ago.

She had been due to ask a question in the House of Commons about it on Tuesday – but the overrunning debate on lockdown measures scuppered the time slot.

Ms Daby, MP for Lewisham, said: “It’s a tremendous achievement to have the support of 100,000 people for an NHS Key Workers Day.

“It shows the level of support and recognition for our key workers, up and down the country, in such turbulent times.

“I’m sure the Government will welcome the opportunity to explore additional ways of acknowledging the ongoing work and dedication of our emergency and key workers.”

Mr Francis said: “It was a surprise so many people have supported it.

“I think the level of shows the public have recognised the sacrifices that have been made on their behalf, and now want there to be a permanent annual recognition of their efforts for us.

“This is not only for their loss of life, but to also show how much we appreciate them, and the debt of gratitude we owe, and don’t want them to be forgotten once this pandemic is over, when the clapping has stopped.”

Mr Francis, whose wife has been a nurse for 30 years, has seen how vital their work is – his own parents are supported by three care workers every day.

He said: “I believe the general public are seeing a different side to medics and key workers, one that before they simply took for granted, or underappreciated.”

Passing 100,000 signatures – his total hit 101,000 on Wednesday – does not guarantee the issue is debated in the House of Commons.

But Anthony hopes if enough influencers and MPs sign it, the campaign’s momentum will ensure the matter is discussed by the government.

The petition for a NHS and Key Workers Day is here.

Pictured top: Hospital staff outside King’s College Hospital in Camberwell join in the applause to salute local heroes during the nationwide Clap for Carers on April 30 (Picture: PA)