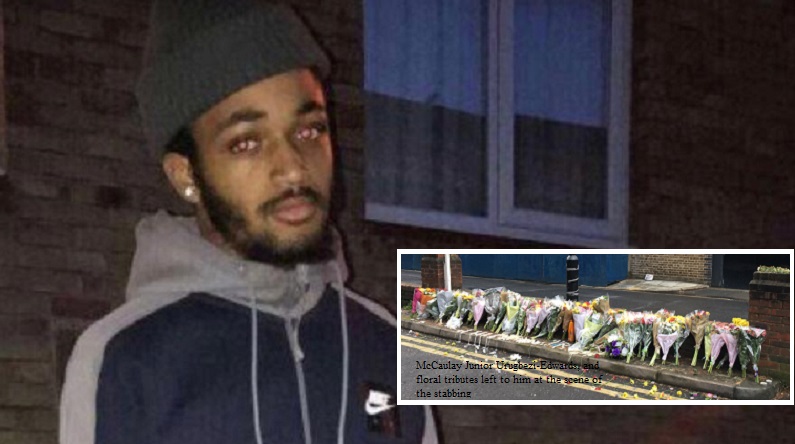 Friends of an 18-year-old man who was stabbed to death on Sunday say they will miss his hilarious jokes – and they want to make sure he is not “portrayed as some gang member”.

McCaulay Junior Urugbezi-Edwards was stabbed to death in Tiverton Street, Southwark after being chased from Newington Gardens.

Friends of McCaulay gathered on Wednesday at the place where he died to pay their respects and many had left flowers.

Yvonne Okpoh, 18, was a friend of McCaulay’s and remembered his sense of humour. She said she was shocked at what happened because McCauley was “never involved in things like that”.

Yvonne added: “We went to secondary school with him so we’ve known him for like four years. He was funny, hilarious – he had so many jokes and would do these little bits. I can’t believe he’s gone. We’ll miss him.

If you were upset you could go to him and he would cheer you up. “We don’t want him portrayed as some gang member – he wasn’t like that at all. He wanted to go to uni.

“All we know is that he was walking through on his way home – he must have felt safe to come this way.” A

woman, 33, and a 17-year-old boy have been arrested. The woman has been released on bail but the boy remains in custody in Norwich.

Detective Chief Inspector Richard Leonard said: “Two arrests have been made but we still need to hear from anyone with information that could help us.

We are following a number of active lines of enquiry based on CCTV, forensic analysis and local engagement.

“McCaulay was chased from Newington Gardens, which is known as Gaol Park, into Tiverton Street where he was attacked and found shortly after by LAS medics. Did you see the chase or the attack?

Please call and share what you know with my team straight away.”