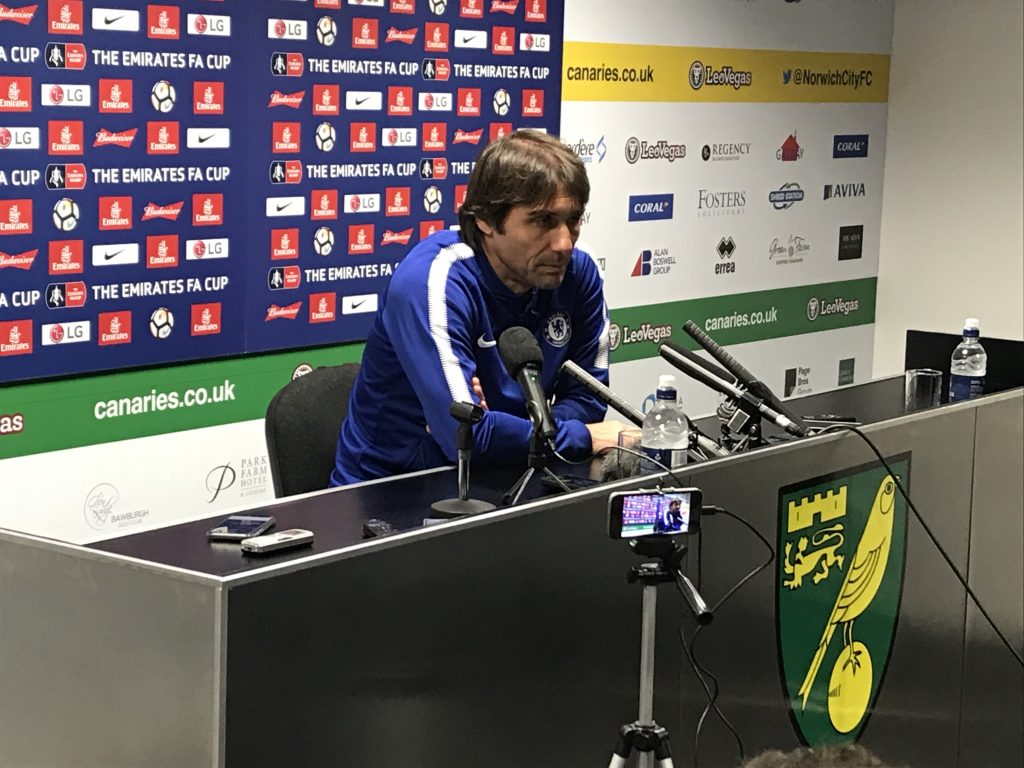 Antonio Conte is reflective and unhappy about his charges performance against Norwich City, which ended 0-0 this evening and results in a FA Cup replay at Stamford Bridge.

“For sure, there is a bit of disappointment because to have another match in a schedule that is so busy, is not easy, it’s not simple,” he said.
“But we tried to win the game and we knew very well that it would be difficult to play. We knew the game would be very tough in this trophy, especially when you play away. It’s very difficult and the game was very tough, especially in the first half.

“We had difficulty. Offensively, we were poor. In the second half, we tried to improve and created the chances to score. In the end, I think Norwich deserved the replay at Stamford Bridge.
“They defended very well and showed themselves to be well organised. At the same time, I must be pleased for the commitment of my players. I made many rotations and I’m very happy with Kenedy’s performance. David Luiz came back after one-and-a-half months. It’s a pity as we wanted to win and now we have to play another game.”
So what’s was the problem?
“I think that our movement wasn’t good enough,” he conceded.
“We found a lot of difficulty to find the right space and sometimes we lost our order. We lost our combination play, but in the second half we did better. But, at the same time, you have to praise the opponent because I think Norwich played a very good game. They defended very well and, I repeat, that the result was fair.”
The scoreless draw meant another blank for striker Michy Batshuayi – as Conte happy with him?
“I’m pleased for Michy’s commitment,” he suggested.
“He tried to work for the team; he tried to help us. When the striker plays the game, he wants to score. But I’m pleased for commitment and his work for the team. He has to continue to work and to improve. Don’t forget that Michy is another younger player. He has a lot of space for improvement in his career