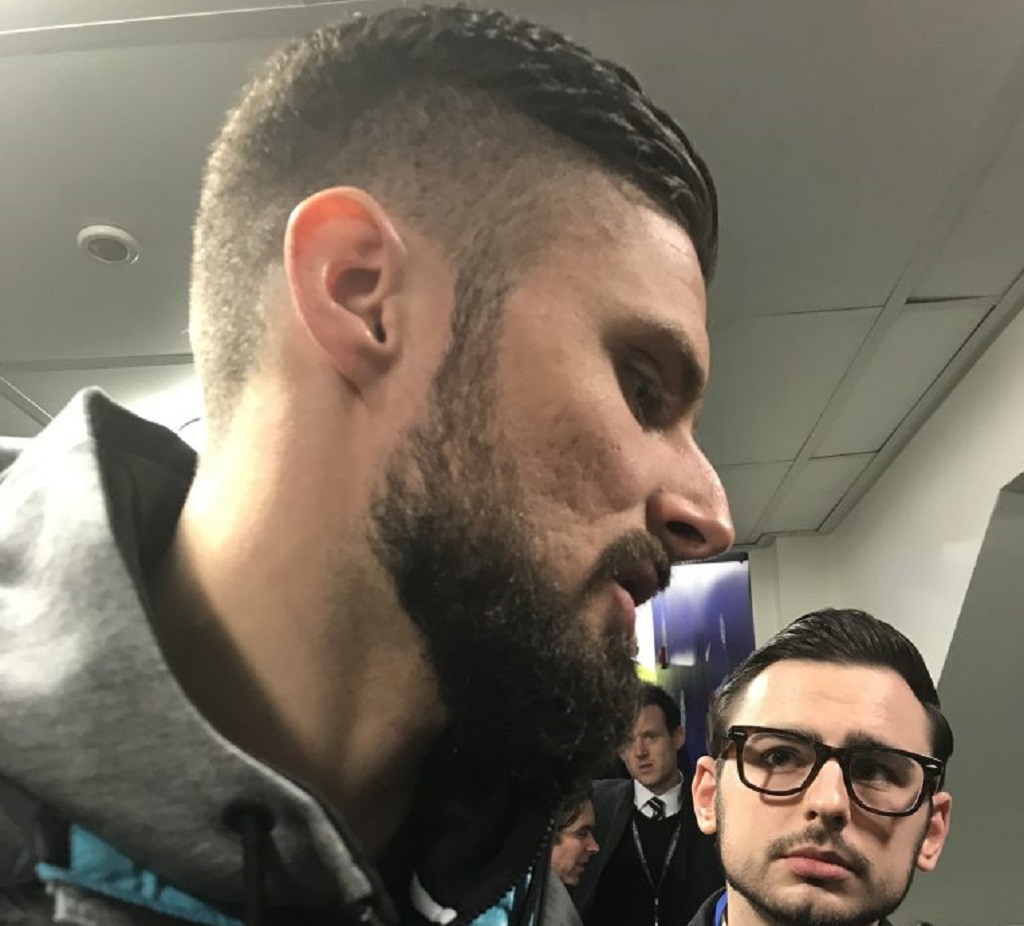 Olivier Giroud bled for his new team as his home début for the Blues saw a very happy Frenchman do his bit to secure three points last night against a woeful WBA.

Giroud, a £18million signing from Arsenal had five stitches in his head after a clash with a WBA defender.

But this did not put the hit man off and when he was finally subbed late on, he came off to a rapturous reception from the Chelsea faithful.

He said: “I was very excited to make my debit at Stamford Bridge.“I’m very happy for the team.

“Obviously we needed those three points. We need confidence for the following games against (Barcelona and Manchester United) and we did the job. “We kept a clean sheet, scored three goals and could have scored more. We have been strong.

“It’s true that there were times when the team was not playing with full freedom at times but it is normal after two disappointing results.

“I felt very good. It has been maybe two months since I last started a game. I have tried to work hard in training to get ready physically and do what the coach asked me to do tactically. There is still room for improvement but I take a lot of pleasure from what happened on the pitch.

“I’m happy to have set up the first goal for Eden.” Giroud conceded he was not fit enough to finish the game. “I couldn’t play all the game because of my physical form. I also had pain in my calf and I was limping. But I didn’t want to come off.

“When they put stitches in my head at half-time, I told them I wanted to carry on. But the calf was very painful so I couldn’t stay on for the whole game. “I had studs in my head and it caused a big cut. I had five stitches at half-time, but it’s okay – I got used to it.”

Is Chelsea anything like Arsenal? “As a football player you need to move on and be ready the first day at your new club.

“It’s a new challenge for me and it has been special for me to leave Arsenal because I had five amazing years there. But right now it is a new chapter of my career and I’m focused 100 per cent on reaching our targets.

“I am very happy to be here at Chelsea.” The rivalry between the two clubs does not seems to have affected his relationship with the Chelsea fans.

“I received a nice welcome and I was very happy with that. I know people support us and support me,” he said.

“I will try to repay them on the pitch. When you wear the shirt, people want you to give the maximum. I know I will have to be efficient, scoring and assisting sometimes.

“Obviously we don’t have too much time to integrate. But I feel very good and the players have been very good to me.”

Giroud will be hoping to play more regularly than he did under Arsene Wenger.

“Yes, obviously that’s why I needed to move. “I needed a new challenge. Chelsea was the perfect team for me, the perfect club. It’s the Premier League and the club that has won the title the most in the past 10 (13) years.

“It’s a massive club and I’m very proud to be here and to continue my career in the Premier League.”

Already Giroud seems to be working well with Eden Hazard – allowing the midfielder to express himself fully – two goals last night a testament to that. “Yes. It is simple to have a good understanding with him because he smells the game.

“He smells football. Even with Pedro or Willian, whoever plays No10 or midfielder, we always try tactically to have a good understanding.

“We need to work on the  relationship in training and after to do it in the game. That’s what the boss asked us.

“It’s easy for me because the two No 10s play closer than I have played with in the past.

“It’s very important for our game. We could have been more efficient against West Brom, Eden and I.

“He could have assisted me and I could have scored, but hopefully it will come in the next game. Anyway, I am happy for him that he scored two goals. “And there is the added bonus of being back in the Champions League?

“We are going to trade things step by step,” he said.

“First we want to go through in the FA Cup. Obviously we have three big games to come – Barcelona and the two Manchester League games away. “That’s why we need the confidence to be high. We need to keep it up, we need the momentum. Hopefully we will have a good game.”

For Chelsea to secure some silverware this season, ensuring Chelsea keep Hazard and Thibaut Courtois is a priority – Giroud agrees?

“Obviously they are very special players,” he said.“They have been here for a few years now and have done a great job for the club. They are very good on the pitch but good guys as well in the club.

“It is very important to keep these kind of players, even for their leadership off the pitch. I don’t have to say too much about their qualities because they show it.”