F W Evans, the cycle shop, began in Lambeth and then thrived as a single shop in Kennington, from 1921. The chain now has 50 stores from Plymouth to Glasgow, selling and repairing bikes and acting as a hub for the cycling community. Here TOBY PORTER looks at its history, including an interesting correspondence founder Frederick had with one of his regular clients.

As author of a pamphlet extolling the benefits of a new style of the ‘lightweight’ bicycle, he advocated using innovative design to open up cycling to the masses.

He edited the Cyclists’ Touring Club’s Cycling magazine before, deciding to practise what he preached.

In 1921, he took the plunge and opened his first shop, F.W. Evans Cycles in Westminster Bridge Road, Lambeth.

He later moved to Kennington Road, building up his reputation especially for building his own frames and bikes, earning an award from the Cyclists Touring Club (CTC) for “The greatest improvement in cycle design, construction or equipment during the year 1925”.

The biking boom helped. The number of cyclists on Britain’s roads doubled from 4.7million in 1929 to just over 10 million in 1936.

Levels peaked in 1949 when pedal power made up 37 per cent of all journeys – that’s higher than the cycling levels in the Netherlands today.

Frederick’s correspondence with W S Swann Esq, which was kept by members of his family and passed to the company, starts in 1929, when he tells his customer that some repairs have been delayed by BSA sending the wrong parts.

“I would ask you to believe that the fault for the delay is not mine,” said Frederick.

Swann is a friend enough to have passed on a complaint about Evans’ customer service in 1938.

Frederick adds: “I am eternally grateful you passed on the inquiry concerning the supposed neglect of my business. There is not a word of truth in information you were given.”

Frederick reveals his only son is currently a classics student at Hertford College, Oxford – “qualifications are rather remote from the necessities of the cycle business”.

He goes on to tell a story about sitting in some sort of club when one of the other customers pulled out a receipt from his pocket.

“One of old Evans’ receipts,” the man cried, Frederick recalls to Swann in the letter.

Evans himself added in the letter: “He went on to tell [to his friends] what he had said to ‘Old Evans’ and what ‘Old Evans’ had said to him, showing how smart he was and how dull and antiquated ‘Old Evans’ was, involving considerable merriment from his admiring clubmates. I did not give the game away as I did not consider his attitude harmful.

“Your informant is in another category.”

These 10 items of correspondence and receipts from Evans end in 1938.

With the outbreak of war in 1939, Frederick joined the Royal Air Force and left the business in charge of his manager.

He was hit by a milk float and died in 1944, and his widow took over the business.

At the time, the shop sold a range of cycles and toys, but during the 1970s Joseph handed the business on to his son, Gary Smith, who developed the shop into a specialist cycle retailer and expanded it massively.

After more than 50 years of trading in Kennington Road, redevelopment of the site saw the store relocated to The Cut in Waterloo in 1977, where the shop continued to trade until 2019 – the latest reincarnation of that original Cut store won the Retail Week Enterprise Award for Store Design of the Year in 2013.

The Evans Cycles Mail Order catalogue then enabled the firm to supply a wider range of products to a much larger audience from a new central distribution centre, in Leatherhead, Surrey.

Evans Cycles expanded with two more stores in the West End and Holborn in 2001. 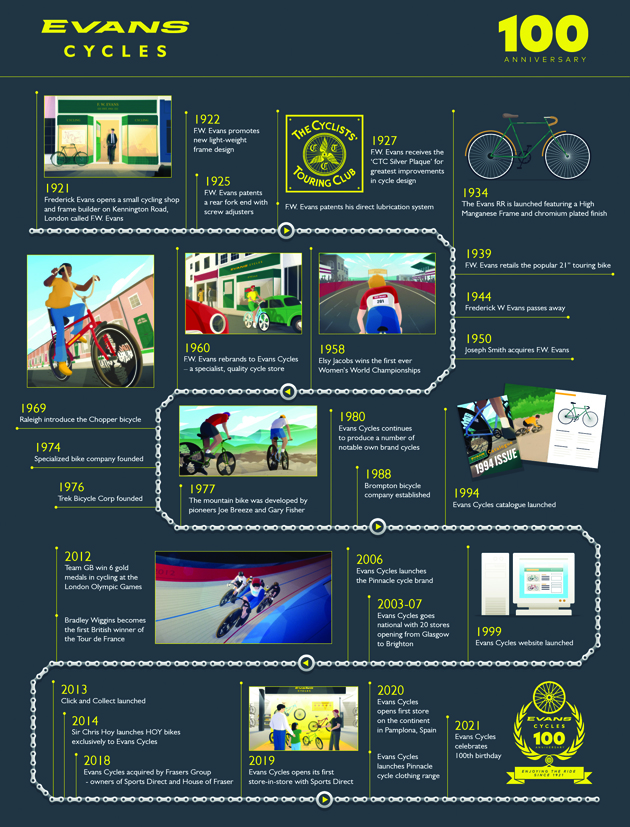 It opened between two or three stores each year, including one in Castleford, near Leeds in 2004, until 2006 when the company opened six.

Launched in October 2006, its own Pinnacle brand of frames was then followed by the FWE brand of accessories in 2013.

It was bought for £75million in 2015, but went into administration in 2018, when Sports Direct bought it for £7million.