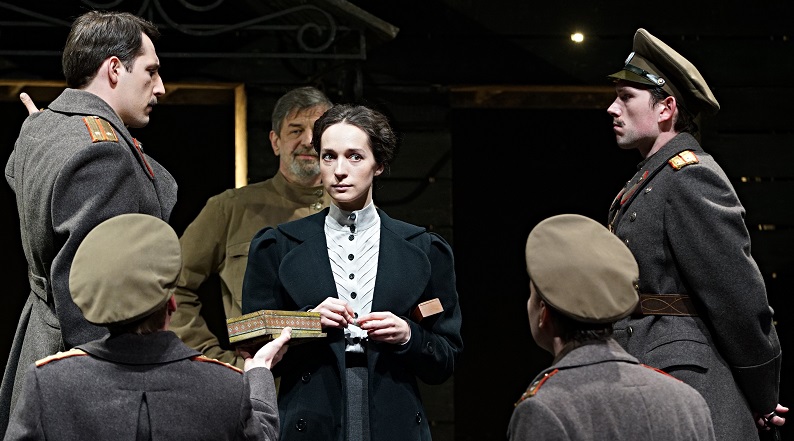 An evening in the London theatre rarely requires an act of bravery. But sitting through nearly three hours of Chekhov in the original Russian might just about qualify.

Thankfully, there are several subtitle screens scattered around the Vaudeville Theatre to help you along.

For the brave, however, the rarity of the experience, and quality of the acting from the Maly Drama Theatre company of St Petersburg, make the gambit worthwhile.

It might even change your understanding of Chekhov, writes Christopher Walker.

The playwright’s work is always a fascinating commentary on the last days of the doomed Tsarist upper classes. Bored and adrift in a new world that is rapidly turning its back on them.

While their days are largely filled with leisure, they long for work, only to find it is not quite what it is cut out to be.

Some of us could have told them that. The story concerns the three Prozorov sisters living in a remote provincial town somewhere in Russia and dreaming of their beloved Moscow.

The sisterly dynamic between the three of them is well captured by Chekhov. Each is frustrated and in search of love.

Olga, the eldest, played by Irina Tychinina, has virtually given up, and by now would marry “any man, even an old man if he asked me”.

Masha, played by Ksenia Rappoport, has married the annoying school teacher Kulgyin, but she doesn’t love him, while the youngest Irina – Ekaterina Tarasova – is still looking.

All three actresses give superb performances. It is hard to say how much we are meant to sympathise with them. They are clearly well off – their father was a General, living in a large house, with servants.

They are also surrounded by eligible men, mainly officers from the brigade who are stationed locally. Irina has her pick of these, but is hanging out for “true love” in Moscow.

She is also pursued by a very charming and soft hearted Baron – as played by Oleg Ryazantsev.

One gets the feeling that part of Chekhov’s message is that dreams can sometimes get in the way of enjoying real life.

The quality of all the performances is strong in the Maly company under the firm direction of Lev Dodin, who has previously won an Olivier award.

Apart from the numerous young men hanging on the Three Sisters’ every word, there are several more mature characters, each spouting philosophy.

The amusing Doctor Chebutyin, who comes out with existentialist questions when he’s had too much vodka.

The introspective Vershinin, who soon captures Masha’s straying heart, and the dark figure of Solyony, a would-be poet.

It really doesn’t seem that bad for the sisters. The set is surprisingly stark for this age of elegance, perhaps a reference to how the sisters feel, even while surrounded by comfort.

Lev Dodin has chosen to have all the dialogue take place outside, with his performers sitting on the front steps of the sisters’ house.

While this works for the summer scenes, I am not quite so sure they would be doing that at other times of year in the Russian climate.

Still, the house looming in the background does add to the claustrophobic atmosphere the sisters feel – even if in the original text they seem oblivious to it, and all their material comforts.

Overall, this was a fascinating experience.

The vodka-driven philosophising of the various male characters, and the endless pathos of the three sisters, somehow acquire a real edge, and indeed believability, when spoken by Russian actors.

You start to wonder if all the previous productions you have seen, while being so much more accessible, have somehow missed the point.

Well worth the effort of all those surtitles. Chekhov’s Three Sisters plays at the Vaudeville Theatre until June 29.