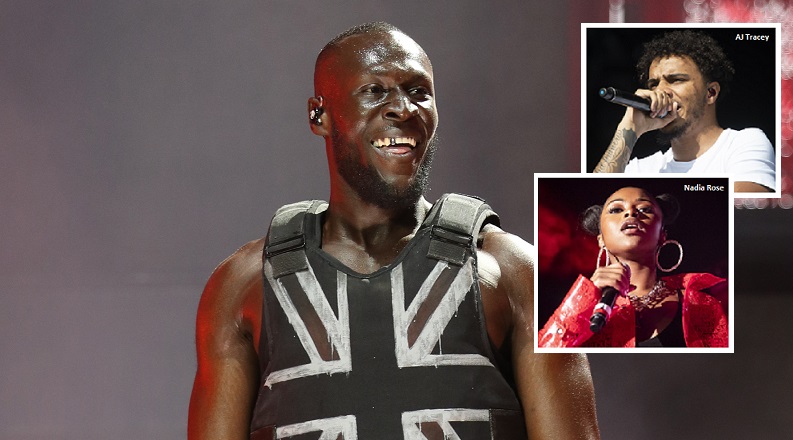 Stormzy may have made history by being the first black solo performer last month at the world’s most prestigious music festival, Glastonbury.

But the effect of that show, in front of 170,000 festival-goers, may have been more profound than just the South Norwood rapper’ s ability to break through barriers.

Because the rapper also name-checked a string of artists who are also making their names in the mainstream.

Streatham’s Dave acknowledged the 6ft 7in star was blazing a trail, but the man himself showed his support by saying: “There’s so many legends that paved the way for us, but there’s a bag of us coming through now.”

And of the 50 artists he listed as changing the game within UK music, well over a third were all proud South Londoners:

Smoke Boys (previously Section Boyz), who are six Croydon rappers who have been together since 2010 but blew up with their 2015 trademark track Lock Arf .

P Money – the Grime MC who is also big on the Baseline scene, from New Cross. His trademark track was so popular it was released on vinyl: What Did He Say.

Walworth’s own Ms Banks made her name with Come Thru but she is now crossing over with her hit trademark track, Snack with Kida Kudz.

A2 – the underground rapper from Croydon. He is taking his music international with his trademark track, Southern Comfort, featuring Atlanta rapper, 6Lack.

Drill legends, 67 from Brixton are pioneers of South London’s grittiest grime. They teamed up with Giggs on their 2016 trademark track, Let’s Lurk.

Loyle Carner – born in Lambeth and raised in Croydon, made his breakthrough three years ago with Stars & Shards, which featured a more mellow style of rapping.

One of the biggest names on the scene at the moment, Krept & Konan, are from Gipsy Hill and Thornton Heath.

Yungen was raised on the Loughborough estate and went platinum with his trademark hit Bestie featuring Yxng Bane.

Stormzy’s own cousin, Nadia Rose also from Croydon, won a MOBO for best video with her trademark track Skwod.

Novelist, who is the former Deputy Young Mayor of his hometown, Lewisham.

Yung Fume – from Thornton Heath who took his music international in Atlanta to create his EP, Level Up, with all star producer, Zaytoven.

One of the young artists shouted out by the legendary Stormzy was Croydon-raised Loyle Carner.

The 24-year-old was described by NME as a “sensitive and eloquent rapper”.

This is fitting as a lot of his material is inspired by his personal life; the death of his stepfather and grief.

Carner started releasing music in 2014 after the death of his stepfather, Steven Vengeance, who was also a musician .

Carner still carries his football shirt on stage with him. He called his 2016 tour ‘Cantona’, his stepfather’s football hero, in memory of Eric Cantona.

Carner’s music often features different artists such as Jorja Smith and Tom Misch, but one recurring feature is his mum, Jean.

One track that is particularly beautiful is Sun of Jean where he talks about the pressures that were on him after his stepfather died.

The track features poetry read out by his mum, ‘He was and is a compete joy, The world is his, That Scribble of a boy,’ which is accompanied by a piano instrumental from his late stepfather.

Carner released his first EP, A Little Late, in 2014 which got him a lot of attention from other artists and his 2017 album Yesterday’s Gone was nominated for a Mercury Prize.

He supported both Joey Badass on his 2015 tour and spoken word artist Kate Tempest.

Carner also appeared on stage with American hip-hop legend Nas at his show in Bristol in 2016.

Carner was diagnosed with ADHD and dyslexia as a child. His stage name is actually a spoonerism of his double-barrelled name, Coyle-Larner and is an allusion to his dyslexia.

Carner partnered up with GOMA to set up a cookery school for teens aged 14-16 with ADHD to teach them how to cook as a way to channel their own creativity.

Carner is also a CALM (Campaign Against Living Miserably) ambassador.

At his latest album launch for Not Waving, But Drowning Carner had artwork on display and for sale, all proceeds went towards CALM.

He is also a part of the #BestManProject alongside Rio Ferdinand and Prince William to get men to open to each other more.

Carner will be touring across Europe in late October.

The final show will be in London at Alexandra Palace.