I have always been wary of eating roast dinners out, partly because they don’t match up to my mum’s Sunday special.

I can count on one hand the number of roast dinners that were not utterly forgettable.

It’s a tricky thing, producing a roast for 50 or perhaps a 100 customers in a day, so I’ve tended to steer away and just order a burger.

But I can honestly say the dinner at The Bull in Streatham justified my decision to tell mum that I would not be coming round last Sunday.

I was wary at first – over the phone I could already hear with longing the potatoes boiling away, the start of a day long process to achieve maximum crispiness.

I also remember a previous dinner at The Bull, perhaps about five years ago, which was okay but not memorable.

I thought maybe it had been during the pub’s previous life, The Pied Bull, an old man’s pub that became utterly transformed with a big injection of money from Young’s, but perhaps they didn’t do food.

In any case, this counted as a different experience, so much so that I asked whether they had a new chef, only to be told he had been working his magic here for, indeed, about five years. 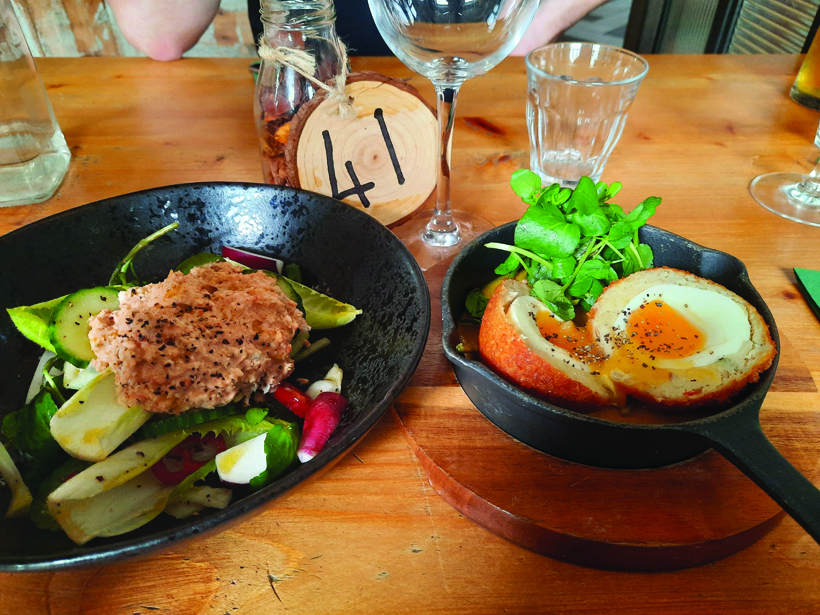 There is a burger shack in the seated beer garden, which is far more charming than it appears when gazing in from the smog-filled London Road, and more of a restaurant feel inside, but it’s still classically a pub, with drinkers matching diners, offering Young’s on cask plus some craft beers and an impressive wine list.

Feeling hungry, we ordered a couple of starters – the haddock scotch egg in katsu sauce transforming the humble petrol-station snack into something wonderful.

But today was all about the roast. I ordered the pork belly and my companion the chicken, with all the trimmings.

The thing I really liked about it was that the proportions and ratios were spot on, generous enough but not too formidable that you couldn’t finish it.

The meat sat on a bed of cabbage and leeks, with some carrots to the side. It didn’t try to cram in every roast-dinner side you could think of. But it all married up perfectly.

It wasn’t perfect – not enough of the gravy for me – but it was pretty good, a nine out of 10, and at £17 for a meal that you would come back for, not bad value I thought, which is something Young’s don’t always get right but did this time.

The puddings were sublime – chocolate and peanut brownie and ice cream, and an almost deconstructed-looking crumble with every piping-hot mouthful a delight of fruit and burnt biscuit.

A wonderful experience and one to add to the best roast dinners in South London list, and a shout-out to the staff who made us feel so welcome.