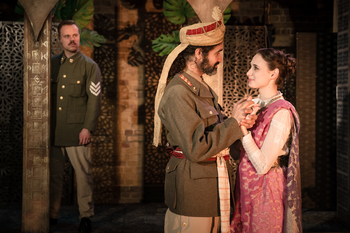 Christopher Walker reviews William Shakespeare’s Othello, playing at the Union Theatre until April
6th . http://www.uniontheatre.biz/whats_on.html Box office – 020 7261 9876
**** (Four stars)
Walk into the Union Theatre right now, and you will be transported in time and space. Back to “British India” – the Raj of exactly one hundred years ago. The air is heavy with incense, and the sub-tropical soundscape had some punters fanning themselves with their programmes. Immersion theatre at its best. There is no question that director Phil Wilmott’s “bold new interpretation” of
Shakespeare’s Othello is a huge hit for this little theatre.
Shakespeare loved a villain. And in this production of this play, it certainly is Iago who steals the show. Rikki Lawton’s performance is simply outstanding. He perfectly captures the wheedling insincerity of Captain Othello’s chippy ensign sergeant Iago, and manhandles the sixteenth century English into Edwardian cockney. It is a big “ask”, but he delivers. You want underlying menace – no problem. He imbues the line “I hate the Moor” with a psychotic intent.
Othello is a very interesting window into the racial attitudes of Tudor London, and the different interpretations over the years are a catalogue of changing attitudes. Othello’s exact racial identity is a question of debate, and historically he has often been played by a white man in make-up. This
missed the crucial point that Othello must be “different,” an outsider, isolated amongst the white characters, and a contrast to his young wife Desdemona. And at the same time “accepted.”
Miranda Kauffman’s book “Black Tudors” published last year was an eye opener into just how many black people there were in 16th century London. She identified 360 different individuals, all living perfectly normal lives. Everything from a courtier to a blacksmith. They were remarkably accepted – such as the family of a black silk-weaver living in Southwark in the 1580s, close to this very theatre. Slaves on Spanish ships then passing through London (this is before the British slave trade of course) were set free by English courts, if they stepped on English soil. Or as the Judge put it: “England has too pure an air for Slaves to breathe in.” Multicultural London has deep roots.
As such it was fitting that Othello was first played by a black man on the London stage in 1833 – the African American Ira Aldridge who had to come here to further his theatrical career. In the States he’d have still been in chains. In this production Matthew Wade, who is of mixed race, successfully portrays Othello as an Indian captain. He is a tortured soul prone to epileptic fits and torn between his roots and his chosen career. He dramatically castes off his British uniform halfway through the play. He is Iago’s patsy, easily manipulated into becoming “the green-eyed monster.” The phrase originates here.
The two female parts – Desdemona and Iago’s wife Emilia – have their fair share of lines. Carlotta de Gregori’s Desdemona is all innocence, and I have to say Claire Lloyd is the best Emilia I have seen.
Indeed. Phil Wilmott deserves top marks for coaxing quite such outstanding performances from so many of his players. Young Maximilian Marston brings more life to Roderigo than any other production – a dissolute coke-snorting youth in faded flannels. His patriotic songs on the club piano add to our “immersion”. Likewise, Jerome Dowling’s padre Cassio is well carried, while Megan Grech
gives the role of Bianca real meaning. The creative team achieve miracles on a tight budget. Sound designer Julian Starr deserves a particular “shout-out” for all that tropical squawking.
“Bold new interpretations” of Shakespeare often fall short, particularly in small fringe theatres. But Phil Willmott and his team have really triumphed here.