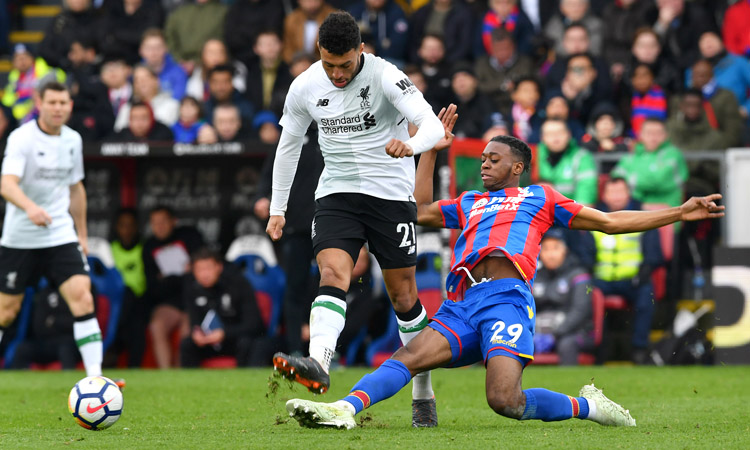 Crystal Palace Sport
6th April 2018 Sports Reporter 0 Comments
by Andrew McSteen
Aaron Wan-Bisakka was a young academy graduate shocked at making his first-team debut as recently as February.
That was against Tottenham Hotspur in a 1-0 home defeat.
But he has now, after five games, kept his place to qualify as a regular. And he’s playing for England U20s as well.
He was initially deployed due to an injury crisis for the Eagles.
Manager Roy Hodgson could have named his own team – with substitutes – of injured players.
But still, some observers might have thought that Wan-Bissaka would be out of the first team as quickly as he had come in.
But an impressive performance against one of Europe’s best strikers, in Harry Kane, started a
run of five-straight Premier League matches – the most recent against Europe’s second top striker in Mo Salah, for Liverpool last Saturday.
Sandwiched in between those games were Manchester United, then Chelsea, then a crucial 2-0 away win against relegation rivals Huddersfield, before that home match against Liverpool last week.
That run of games meant that the 20-year- old had faced four of the top five Premier League teams in
his first five matches.
The 2-1 home loss to Liverpool put the Eagles in 17th spot in the Premier League, one place above the relegation places.

But Wan Bissaka can be proud of his form.

“Five games in a row,” said Wan-Bissaka. “I just keep going and try to improve in every game and every training session – I keep my head up and not let anything get to me.”
Despite four of his five games resulting in losses, Wan-Bissaka has continued to improve and his
performances have been a shining light for the team from SE25.
He has had such an effect that the right-back position is his to lose now.
The Palace faithful have even coined their own terrace song for him, to the tune of the Clash’s ‘Rock the Casbah’.
The Liverpool game, despite the defeat, was another prime example of not only the defensive qualities of the youngster, but his attacking intent – a throw-back to his time as a winger.
So how much Hodgson is telling him to push up the field during games?
“A lot,” said Wan-Bissaka. “He’s telling me that when the ball is on the opposite side and it’s getting switched, to stay wide, get it and make an end product, and that’s what I try to do.
“There was a lot of attacking from us against Liverpool and there were a few chances that we could
have taken, but we were unfortunate with them.
“There was disappointment in the changing room with the loss.
“But we stuck together, defended as a team and kept going. The back four stayed as a unit which helped me and made it easier as we just stayed narrow and made them play around us, but their two goals were a bit difficult to deal with – Mo Salah was a challenge, but we like challenges.
“In the changing room after the boss just talked about us being unlucky, but said they were a strong
team and we should keep our heads up.”
During the Liverpool match, in one of his attacking moments in the second half, Wan-Bissaka raced
the full length of the Selhurst Park turf and won a corner thanks to an audacious stepover as Palace
pushed for an equaliser, all in front of the Holmesdale Road end – to rapturous applause.
“It’s a good boost and gives me confidence next time I get on the ball,” said Wan-Bissaka. “It helps, and I really appreciate it a lot from the fans.
“Before the season I thought I would get a few minutes towards the end, but my debut was a shock.
But now, I am happy about it and I’m relieved, so it’s good, and I want to take my opportunity.”

Aside from Palace, Wan-Bissaka also made his England U20 debut in the past few weeks as he played against Poland and Portugal in the Euro U20 Elite League. A 1-0 away win against Poland in Bielsku-Bialej saw Wan-Bissaka shown red in the 76th minute after picking up two yellow cards, while a 3-0 home win at the Academy Stadium in Manchester against Portugal saw the right-back brought on in the 67th minute.

And, like Wilfried Zaha, Wan-Bissaka is eligible to play for two nations, having already been capped at
youth level by DR Congo. So which country would he want to play for in the long term?
“It depends on the opportunity I’m given – I’ll take whatever is given to me,” said the Addington-born
youngster. “I’ll make sure l do what I can to impress and when it comes to the time to make that permanent decision I will speak to Wilf about how he decided.
“I enjoyed every little bit of of playing for England.
“It was good, everyone was welcoming, and they were good lads. The Poland game was alright, it was a bit difficult with the pitch, but we kept to it and I was unfortunate with the two yellow cards, but the team won the game.
“The second game against Portugal was good, a good performance and 3-0 to end the camp, so that was good. I had my parents come to the Portugal game in Manchester – it felt good for them to support me and they just keep pushing me; always giving me advice and it helps a lot.”
Now Wan-Bissaka is a cemented first team player for Palace, the youngster now finds himself offering
advice to young players who could make the short step across Copers Cope Road in Beckenham from the Academy, to the first team training ground.
“They should look at the situation as if your chance will come and don’t think you won’t ever get the
opportunity, because when you do get the opportunity you need to grab on to it with both hands and
take it,” said Wan-Bissaka, who joined Palace at 11 years old.
“It is a short walk but it is a long journey and that’s what I’ve been through. But I’m here now, happy about it and grateful.”