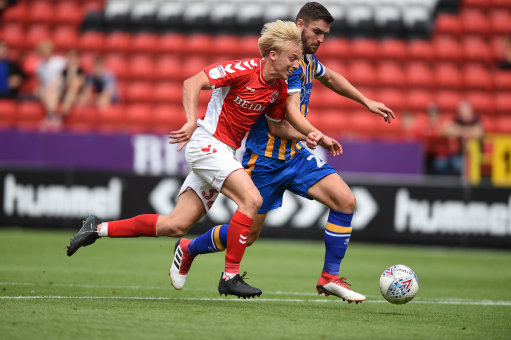 Two academy products have made their league debuts in Charlton’s opening two games of this campaign.

Here academy head Steve Avory runs the rule over the duo and two others who are bidding to make an impact this season.

GEORGE LAPSLIE (pictured above trying to get past Shrewsbury’s Luke Waterfall) Age 20 From Essex Position midfielder Joined Charlton: 10 years ago.

Older brother Tom, aged 22, plays for Colchester. Scored on his pro debut, in the 2-0 Checkatrade Trophy victory at Crawley a year ago.

Academy head Steve Avory says: “He is a real model for young players. He is so dedicated each and every day. He works so hard at developing his game. He wants to listen and learn. On the pitch, his workrate is phenomenal. That is what impressed Lee Bowyer. His brother is a similar character – a sensible lad. Family is important – he has such a supportive, solid family behind him, supporting your values: they split their time between watching Tom and George play.

“At times, you have to put the reins on George to stop him running around – he has to think more tactically.”

Went to Harris Academy, Eltham, where Charlton have a school project which allows pupils to train with the club in the afternoons.

Avory: “Taylor is very single-minded in the way he goes about his work – very mature for his age. He has the attitude to learn, which has helped him progress as a player. He has never been the biggest but he has a great engine and is very fit. Tactically, he has developed a great deal over the last season or two. “He might have to go in and out of the team and the under-23s. And somewhere along the line, there might be a loan to help him progress.”

Expected to start this season in under-23 squad. Started in the pre-season friendly against Brighton but was injured. He might be ready for the EFL Cup game at MK Dons on August 14. Has a younger brother in the Charlton set-up.

Avory: “He has two excellent feet – sometimes it is hard to tell which is his stronger one. He has an excellent range of passes. His mum and dad seem to have been coming here forever, every day of the week.”

Expected to start this season in under-23 squad. Currently at Harris Academy, Eltham, so Charlton provide transport to and from school for the teenager.

Avory: “He has been playing a more advanced, attacking role as he has come up through the academy. He is very quick and has a sweet left foot. He has been supported very strongly by his family throughout his time with us.”