AFC Wimbledon earned a valuable point in a goalless draw at home to Blackpool this afternoon – but they should perhaps have taken all three.

Armand Gnanduillet powered a header at the on-loan Millwall stopper, before King then turned a deflected effort wide.

Wimbledon grew into the game as the half progressed, happy to soak up pressure before releasing the pace of Andy Barcham, Kwesi Appiah and Jake Jervis.

Jervis forced Ben Heneghan into an excellent block towards the end of the half. Terell Thomas should then have put the hosts ahead, climbing highest to meet Mitch Pinnock’s cross but heading wide from six yards.

Wimbledon were the better side at the start of the second half. Barcham tested Mark Howard with a low effort before Will Nightingale could not quite create enough space to take a shot from the resulting corner. 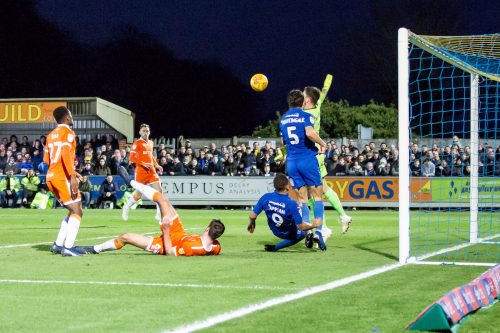 Substitute Harry Pritchard should have put Blackpool ahead with 15 minutes to go, sliding in to meet a low cross but somehow putting his effort over the bar. 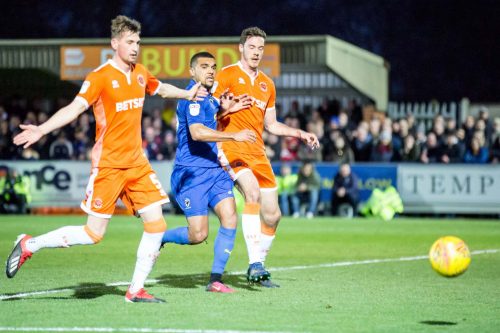 This had been a game of few chances, but it was Wimbledon who should have won. A scramble in the Blackpool box saw Howard make two good saves before a Tangerines defender unwittingly blocked Thomas’s shot on the goal-line.

The Dons continued to threaten, Tom Soares had an effort deflect over the bar. But they could not find a route past Howard.

Wimbledon remain second from bottom, but things are looking slightly more positive on the pitch for the South Londoners.