AFC Wimbledon remain in the League One relegation zone on goal difference after a frustrating draw at home to Accrington Stanley.

A first-half strike from Joe Pigott was cancelled out by a Jordan Clark effort, before Billy Kee missed a penalty in a frantic opening first period.

The result ensures both the Dons and the visitors remain entrenched in the relegation battle.

The Dons made a fast start, with visiting keeper Dimitar Evtimov forced into action inside the opening five minutes, a low drive from Toby Sibbick from the edge of the area beaten away by the Accrington keeper, before Scott Wagstaff couldn’t re-arrange his feet to convert an excellent chance from close-range.

The Dons got their reward for an excellent start mid-way through the first half. Good play down the left saw Steve Seddon’s cross half-cleared to Pigott, who drove a crisp low finish into the bottom corner.

The hosts were seemingly in control, before a defensive lapse from Paul Kalambayi allowed the visitors to level against the run of play. After skewing a defensive header into the air, Kalambayi tried to guide the ball back to Aaron Ramsdale, but Clark nipped in to sweep beyond the Dons keeper. 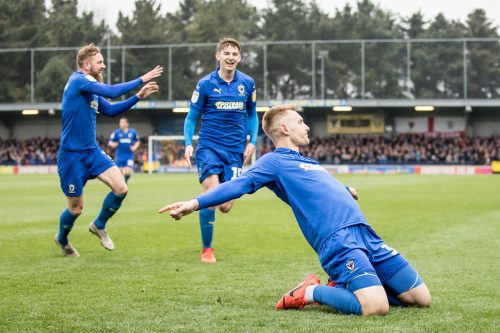 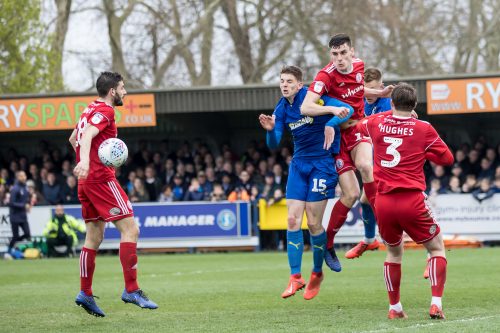 The game was almost turned on its head, as a contentious penalty was then awarded on the stroke of half-time. Accrington’s Paul Smyth was adjudged to have been caught by Wagstaff just inside the area. Kee stepped up but sent a low drive wide of Ramsdale’s left hand post.

The hosts were relentless initially after the interval and were inches away from regaining the lead after James Hanson sent an audacious lob attempt from 20 yards agonisingly close.

The hosts continued to press and probe Stanley throughout the second half without really testing Evtimov any further. A slip from Will Nightingale saw Sean McConville presented with a chance from just inside the box, driving wide of Ramsdale’s near post as the visitors forged a brief bright spell towards the final quarter of the half.

But the remainder of the game ultimately faded out, as both sides were forced into settling for a point. 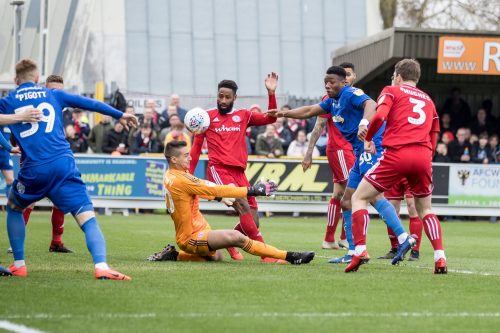