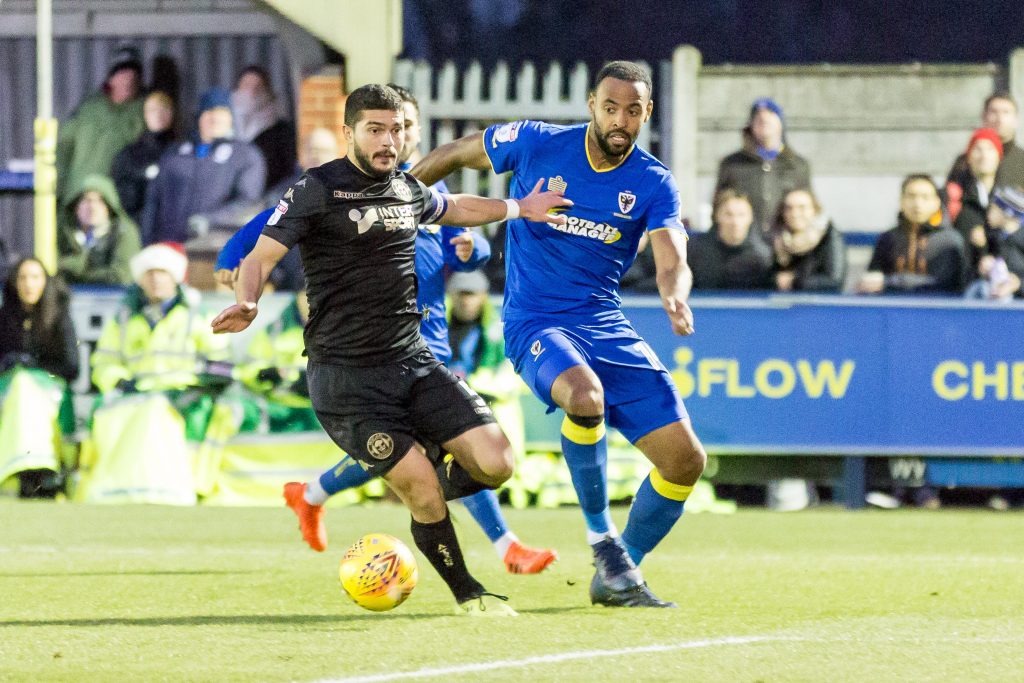 BY RAY ARMFIELD AT THE CHERRY RED RECORDS STADIUM

“Mange tout Rodney,” as his namesake Del Boy might have said. It’s taken almost half a season, but AFC Wimbledon fans finally saw a glimpse of the reason manager Neal Ardley added Liam Trotter to his collection of trundling midfielders.

The former Millwall midfielder has been dubbed “The Wardrobes” by a critical section of the Dons support – but it was the former ex-Lion, along with Tom Soares and Jimmy Abdou, who looked more like the rat pack than a flat pack as their performances masterminded a valuable three-point beginning to 2018.

With a busy festive schedule, Ardley rotated as he brought in Callum Kennedy, Will Nightingale, Egli Kaja, Harry Forrester and Soares, handing long-serving George Francomb the armband in the absence of his injured skipper Barry Fuller.

The hosts had to withstand early pressure from the visitors before gradually imposing themselves. Mark Oxley tipped over a fierce Lyle Taylor shot, before the deadlock was broken as Trotter started and ended a goalscoring move, collecting a return pass from Kennedy to find the net.

With Forrester at his creative best, the Dons could have doubled their lead before the break, but kept up the tempo in the second half and got an early reward when the Essex side only half-cleared a free-kick and Soares flicked on a Deji Oshilaja header for his first Wimbledon goal.

Brown threw on his three substitutes – including the dangerous if unpredictable Nile Ranger – but with the imperious Oshilaja and Nightingale looking committed, harmless efforts from Ranger and Simon Cox never threatened to deny a deserved clean sheet for George Long. At the other end, Taylor’s ceaseless running to chase down seemingly lost causes also caught the eye. With Taylor and Cody McDonald now the only two fit forwards at the club, Ardley must use the January transfer window to bring in much-needed reinforcements for the second half of the campaign.

The fully-merited victory over a lethargic Southend side in such poor form that Shrimpers fans are questioning the tenure of manager Phil Brown, meant the Dons bagged seven points out of a possible 12 during the holiday period and after the excitement of a trip to Wembley on Sunday to face Spurs in the FA Cup, they will travel to Milton Keynes next Saturday for a vital six-pointer with real determination, hopefully summed up by perhaps the moment of the game when Nightingale’s crunching but perfectly-executed sliding tackle on Jermaine McGlashan drew much applause and an appreciative nod from the watching guest of honour – 1988 FA Cup winner Lawrie Sanchez.