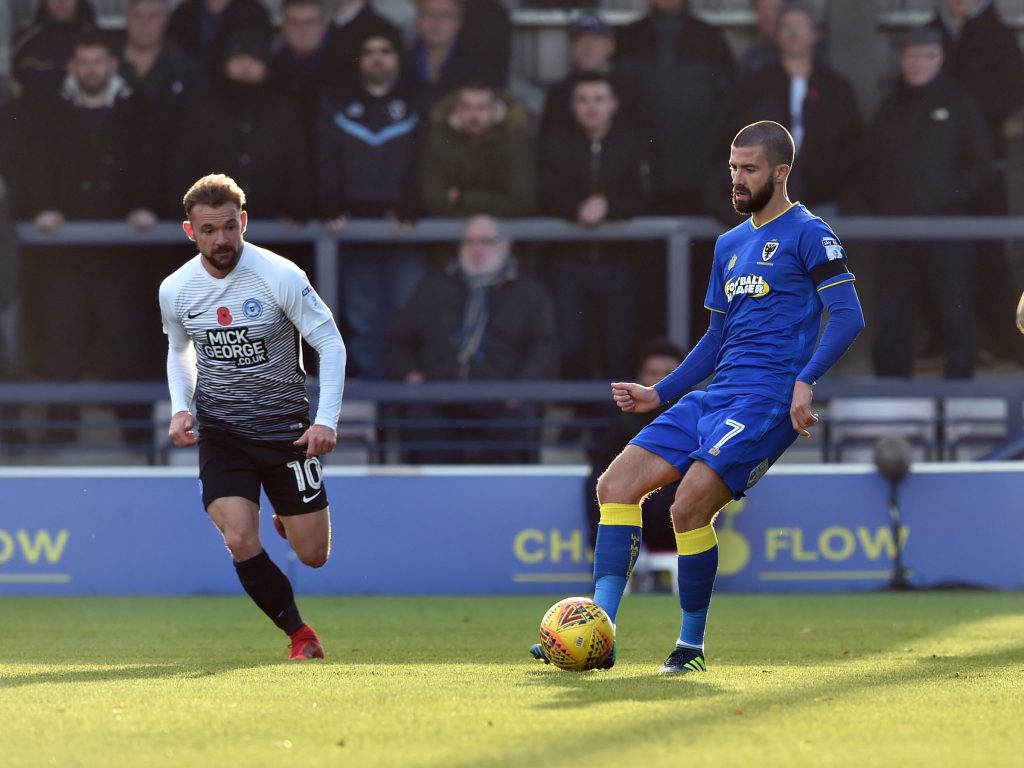 By Dave Hunt-Jackson at SportsDirect.com Park

AFC Wimbledon somehow came away with a draw on Tuesday night after spending 90 minutes with their backs firmly to the wall.

As so often this season the Dons failed to score or even muster a shot on goal but this was a battling and impassioned performance, unlike many this term.

With George Francomb available again after suspension he was the only change with Jon Meades rested as he continues to work his way back to full match sharpness following injury.

The visitors found themselves on the back foot from the off as Oldham showed the form that has seen them climb the table after a sluggish start.

Indeed they proved as strong an opponent for Neal Ardley’s side as any this season with their neat passing game carving out chances all too frequently as Wimbledon fought to find a foothold in the game.

Only a combination of poor finishing, heroic defending and some excellent goalkeeping from George Long kept the Dons in the game during a torrid first half.

Despite being outplayed the South Londoners were unflinching in defence – typified by Francomb taking a very painful blow in his midriff on a cold Lancashire night as he blocked a goalbound effort.

By some miracle the match was goalless at half-time, allowing Ardley to spring a welcome surprise on the resumption.

So often he makes predictable substitutions at predictable times seemingly heedless of events on the pitch but here he was pro-active.

Recognising that his charges were being swamped in midfield the Dons boss withdrew Tom Soares at the break and brought Jon Meades into a five-man midfield, leaving captain Barry Fuller as part of a back three alongside Deji Oshilaja and Darius Charles.

For a while the change of formation bemused Oldham and the Dons enjoyed a relatively tranquil 20 minutes before the Latics began to run riot again.

Long had to be at his best to deny Eoin Doyle with his legs and then Fuller produced a stunning tackle to prevent what looked a certain goal for Aaron Amadi-Holloway.

While Wimbledon failed to seriously threaten Oldham’s goal, it was not for want of trying – credit goes to the home side for a superb display of attacking football that on any other day would haver secured all three points.

There was much to take comfort from in addition to the away point with Ardley’s tactical switch at the top of that list. Jon Meades came through another 45 minutes unscathed and Anthony Hartigan had an accomplished half an hour after replacing Cody McDonald.

The Dons are four games unbeaten and still sit outside the relegation zone, albeit by just two points. If they can show the same spirit in the coming weeks against sides that will provide much less stern tests, there is no doubt they can pull away from the bottom of the table.

Wimbledon supporters – 147 of them braving the long midweek trip north – will be hoping that climb up the table starts with victory over fellow strugglers Walsall at the Cherry Red Records Stadium on Saturday.