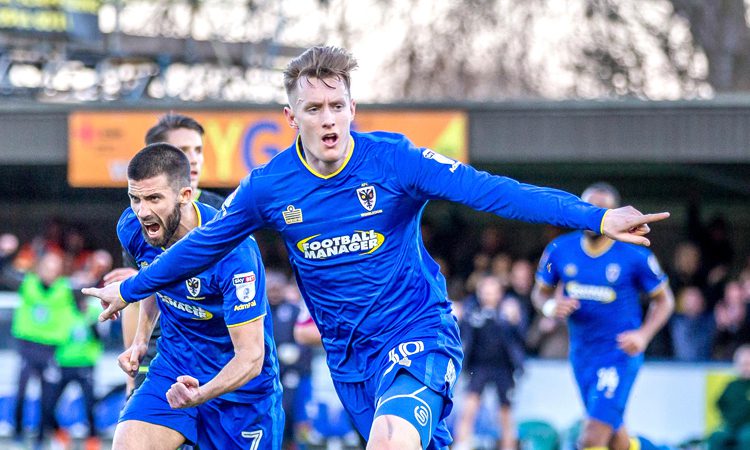 Joe Pigott has revealed how AFC Wimbledon’s 1-0 win over Charlton Athletic put him in the bad books of a family relative.

The 24-year-old started off his career on the Addicks’ books before being released in July 2016. He drifted into non-league with Maidstone United at the start of this season before Wimbledon signed him in the January transfer window.

Pigott had missed two matches with concussion but returned to partner Lyle Taylor in attack on Tuesday night – the latter profiting from Patrick Bauer’s slip to slot in the decisive goal.

“My brother-in-law is a massive Charlton fan and has already messaged me to say how gutted he is we won,” said Pigott. “I hope they go up through the play-offs. I remember Nicky Bailey missing a penalty against Swindon [in the 2010 League One semi-finals].

“They should never be in this league, so seeing them here and playing against them is a bit tough. I’m sure they can push on once the ownership side is sorted.

“My best friend is a Charlton fan. I’m sure if new investors come in then he will be straight back down there with a few thousand other people. It is just a matter of time.”

Time – or rather matches – is one thing that both South London clubs are running out of as they chase their respective short-term goals.

The Dons ended a month-long wait for maximum points with success over Charlton. They are four points ahead of 21st-placed Rochdale, who have one game in hand but were thumped 4-1 by leaders Wigan in midweek.

“It’s pressure but we are all in there as a team,” said Pigott. “You saw that with the way we ground out the result against Charlton.

“It is a massive, massive performance. Three points carried us up the table and other results went our way as well. We need to get past the 50-point mark, probably 52, and have got five more games to do that.

“Lyle absolutely worked his socks off and that set the tone for the rest of us. We knew their threats, what they were good at, and knew if we got at them from the off we’d have a good chance.

“Luckily Lyle took one and that came from hard work, us pressing up the pitch forced the mistake and he took the goal really well. Although they hit the post from a set-piece they didn’t look like scoring.”

Pigott’s spell on the sidelines came from a freak training ground accident.

“I went to shut someone down, they hadn’t seen me and went to power in a cross. I was three yards away and it caught me on the side of the head. I was in a right pickle. I felt terrible afterwards.

“I felt really sick and was in a daze. I really wasn’t with it for a couple of days. But I was back into training over the weekend – heading a few balls – and I was fine.”