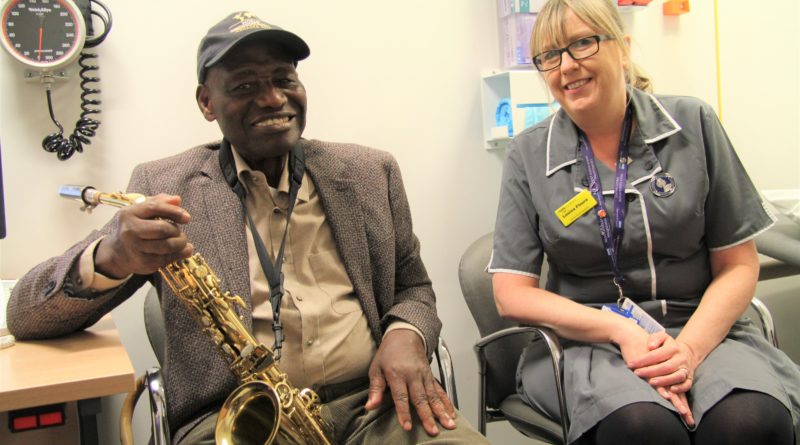 An Afrobeats singer who has finally got a record deal aged 81 has promised to donate a quarter of the profits to a hospital which has treated him for the last 36 years.

And one of the songs by Rex Martey, from Fransfield Grove, Sydenham is about his nurse, Louise Fleure, who continues to treat him at Guy’s Hospital, near London Bridge.

Rex finally has the chance to make a career in music after 60 years toiling in the pubs and clubs of South London.

But it was only when his new high profile label wanted to sign an Afrobeat artist that they contacted him – following recommendations by people who’ve seen him play live.

He said: “This is a dream come true for me because I have been singing and playing sax for a long time.

“But my health has been deteriorating for many years and I have been coming to Guy’s as a patient since 1983.”

Rex – pictured with Louise – who has prostate cancer, is under the care of Guy’s renal and urology services and has dialysis three times a week.  His condition is currently stable.

He said:  “Ten years ago my health was deteriorating and I remember saying to a clinician at Guy’s and St Thomas’ that I wanted to get an album out there to show that I have been here. With this album, which is called African Touring Holiday, I truly am realising my dreams.

“Every treatment has been done – you name it, Guy’s and St Thomas has sorted it out. The care has been brilliant. I have had more health problems than any other person I know and it’s always been sorted.

“I always say to people, if it wasn’t for Guy’s and St Thomas’ I would be dead.

“I’m originally from Ghana and the music I play in the old days was called High Life. High Life didn’t used to be popular but now the second generation of Africans have adopted it.

“Nowadays the young people have a different name for it – Afrobeat. It comes from West Africa.”

Rex Martey has signed a distribution deal with label The Animal Farm Music, who also feature Esteban, with two million YouTube hits for his music; and Everything Everything, whose hit Distant Past has four million hits.

Rex’s album has 10 tracks and one track is dedicated to the nurse who has primarily cared for him at Guy’s Louisa Fleure, lead urology clinical nurse specialist at Guy’s.

Rex added: “One day I was coming home from the hospital and I was thinking about how sweet and how helpful Louisa was, and such a lovely lady. I told my wife that I wanted to write a song about her and she was happy with that. The song is called ‘My Louisa’.”

A quarter of the sales of African Touring Holiday, which costs £7 per album, will go to Guy’s and St Thomas’ Charity. The charity raises money to make the Trust’s life-saving care go above and beyond; from big things to small touches that help patients and their families feel looked after. Find out more and donate here

African Touring Holiday is available on Bandcamp here as well as Amazon. The album and tracks are also on Spotify.