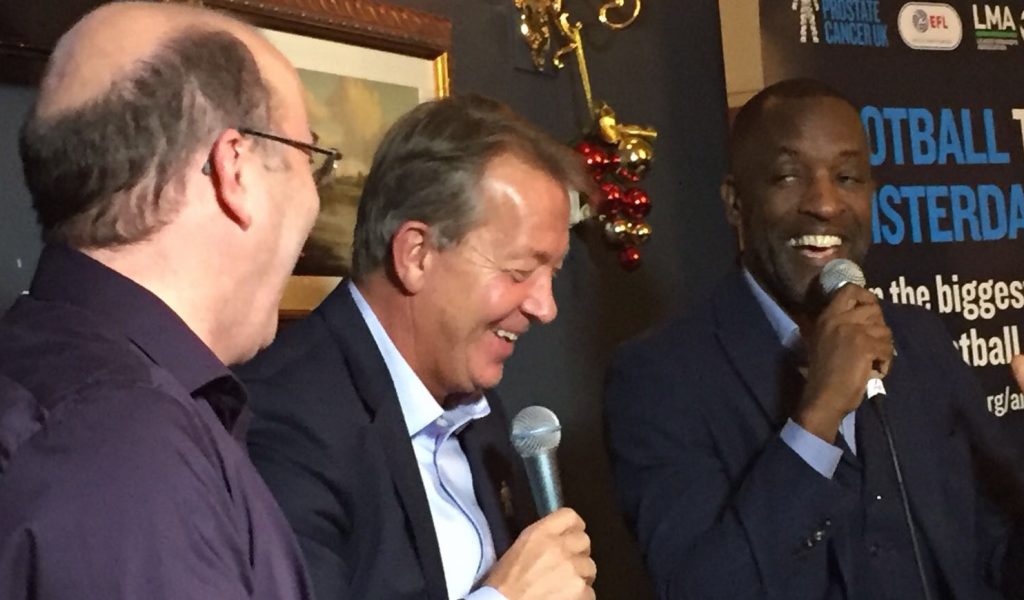 When Charlton Athletic first returned to The Valley they were changing in Portakabins and the old East Terrace was condemned – but none of that mattered to the people who had fought so hard to bring them back to SE7.

Today is the 25th anniversary of the Addicks getting back home. The team will wear a special commemorative strip for their home game on December 9 against Portsmouth, who were also their opponents a quarter of a century ago.

A day later and there is a special dinner which will be attended by Colin Walsh – who scored the only goal against Pompey – and then captain Simon Webster.

Alan Curbishley will be a guest too. Charlton’s current 27,111 all-seater stadium has been down to a lot of the achievements he had during a 15-year spell as manager.

Eight years in the Premier League, and the riches that come with it, helped the Addicks massively fasttrack their infrastructure. Curbishley was initially joint-boss with Steve Gritt before he took sole charge in 1995. For seven of those top-flight years he was the manager.

After Greenwich Council rejected Charlton’s planning application for a return to The Valley, supporters formed the Valley Party to contest all 36 wards in the local election. Sixty candidates canvassed the area to ensure maximum publicity for Charlton’s fight to return home.

Curbishley is keen to downplay his own role in the regeneration of the club, who groundshared at Crystal Palace and then West Ham United.

“People talk about the football side – but the people off the pitch did so much too,” he said.

“I feel so sorry for the directors who have been isolated now at the club. They put lots of money in.

“Everyone was focused on the same thing – getting back to The Valley.

“When you go back to look at some of the footage, I say we become a football club again – because we weren’t a club at Upton Park.

“We left Upton Park and we sold Robert Lee and Anthony Barness. At the time we were doing okay. It sort of derailed us a little bit. But it had to be done. That money – along with the directors’ money – enabled us to get back to The Valley.

“We had to get back, because we all knew how important it was. We’d been away for seven years and the seven-year-olds growing up in South London had gone off and supported other teams. They were 14 now and were never going to support Charlton.

“It was just a relief that it managed to get done. I remember the game being a bit eerie. The whole stadium was not open.

“Myself and Stevie went over the day before the match and the Covered End was leaking. But people were saying that Charlton fans wouldn’t worry about getting wet – they were just happy to be back there.”

Curbishley initially signed for the Addicks as a player-coach in 1990.

“My first chairman when I signed for Charlton was Jimmy Hill,” he said. “He met me and took me to this posh restaurant up in town – they didn’t dare take me to The Valley because it was so bad.

“The big bank had virtually been condemned, it was in a bit of a mess. And they sure didn’t want to show me the training ground.

“When me and Stevie took over we had Mike Norris, who was the chairman for three or four months, and then Roger Alwen took over. People may correct me, but that’s when I felt the momentum began to get back to The Valley – him, Martin Simons and Richard Murray. It was full-on.”

When asked for his favourite match at The Valley, Curbishley takes a moment before answering.

“We had to go up that season – I felt Sunderland [who they faced in a Wembley thriller] didn’t. I knew if I we didn’t do it then I’d lose three or four of my players because they had Premier League clubs interested in them.

“The first meeting I had with the chairman afterwards he talked about the extra money – which is nothing like it is now. He said ‘you can have a third for the team, a third is going on the stadium and a third goes into reserve in case we don’t stay up – and we’ll spend that to get back up’. Which is exactly what happened.

“The first three or four years of my time at Charlton, the fans and owners were doing better than the team. They were taking us to places we shouldn’t have been – then the team caught up and took over for a little while.”

What seems a shame is that the most successful manager of the Addicks – at least in the modern day and arguably all-time – has not managed since leaving West Ham in 2008. A long-running case for constructive dismissal – which he won late the following year – took him out of the frame for jobs.

Curbishley does the Premier League punditry for their overseas TV broadcasts.

“I’m big in Albania now! If you’re in Cyprus or Africa you’ll see me,” he said. “I do miss management. I do a lot of TV for the Premier League.

“You can see what is happening in the Premier League, they are all panicking. We’ve had a quarter of the managers sacked and they are going after the managers who are out of work, because they have got experience.

“When I left West Ham and was looking for a Premier League club to take on, that wasn’t happening. The sackings weren’t so prevalent and opportunities were not so good.

“I’m looking at it thinking if I left West Ham now, would I be in the frame for West Brom or Everton? But the right opportunity never came up.

“You might have 800 games under your belt – but you’re forgotten.”

Charlton need two promotions to get back to where Curbishley left them. At least in the 2017-18 campaign they look to have a squad to challenge in League One.

“Look at Sheffield United – that’s the dream,” said Curbishley. “Get promoted, like they did last year, and they are challenging for the Premier League. It can be done.

“I remember when I first came to play for Charlton, we stayed up by eight points in what they now call the Championship, then Lennie Lawrence brought in five or six players and we won promotion.

“That’s the dream for me. Sheffield United are the sort of situation Charlton can get themselves in. If they win promotion this season, who knows?”?

During an exclusive Q&A event at the Men United Arms (aka The Mudlark) in London Bridge, Alan Curbishley was supporting Prostate Cancer UK’s Football to Amsterdam bike ride on June 1-3 2018.