An alarming prediction that hundreds of thousands of homes in South London could frequently be under water in just 10 years has shocked residents.

Vast areas of the boroughs along both sides of the Thames could be flooded regularly by 2030, according to scientists at Climate Central.

The campaigning international organisation said much of the northern parts of Lambeth, Southwark, Lewisham, Wandsworth, and Greenwich would be hit- above an almost straight east-west line from Woolwich to Wandsworth Town.

River Wandle and Deptford Creek would also be affected.

Climate Central’s survey said: “As these maps incorporate big datasets, which always include some error, these maps should be regarded as screening tools to identify places the may require deeper  investigation of risk.” 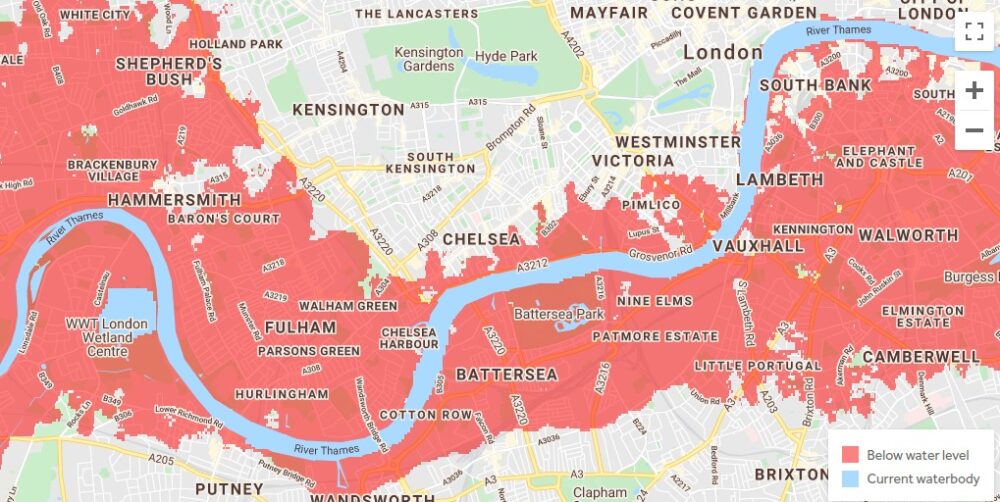 The areas shaded red are those lower than the selected water level with an unobstructed path to the sea.

Areas below the water level but seem to be protected by ridges are not shaded.

They added: “Our approach makes it easy to map any scenario quickly and reflects threats from permanent future sea-level rise well.

“However, the accuracy of these maps drops when assessing risks from extreme flood events.

“Our maps are not based on physical storm and flood simulations and do not take into account factors such as erosion, future changes in the frequency or intensity of storms, inland flooding, or contributions from rainfall or rivers.”

But the survey has been criticised by the Environment Agency.

A spokesman said while “useful to prompt the discussion and the impacts of sea-level rise” and the “need to adapt to climate change”, the predictions are “inaccurate and unsuitable to inform local coastal flood risk.

“The prediction does not take into account extensive efforts taken to prevent such severe incidents in the future, including sea defences, which protect communities from flooding.

“There may also be discrepancies between the climate change scenarios shown on the maps and those we currently advocate as being the most appropriate, based on the climate science contained in UK Climate Projections 18.”

What do Londoners think?

Artist Nicola Gerry, 61, of Dorset Road, Vauxhall, said: “It concerns me a lot if people aren’t worried by these predictions.

“The catastrophic effects of global warming are getting more obvious and this map shows that.

“I worry most for the younger generation. If we are already seeing flooding like this in the next 10 years, then I can’t even imagine what it will be like in 50 years time.”

Charlotte Williams, 23, works at Hobbs Meat Roast in Borough Market. She said: “If these flooding predictions are accurate then the whole market will be underwater and my manager’s business would be ruined, and I would have no job.

“That sounds very scary and it must be down to climate change. I think politicians should treat this as a priority.

“I think the poorer communities and businesses in these areas will suffer the most – and that’s not fair.”

Dexter Scase, 39, is from Lincolnshire but is staying with his family in Elephant and Castle. He said: “We have floods regularly where I am from up north, so this already happens a lot.

“I think if there is proper management to deal with the flooding then everything should be fine. When I was younger storms almost always resulted in flooding, so I don’t think this is as bad as it seems.”

“There is the Thames barrier and it’s closed every year so the sea level already gets too high. But as for what needs to be done, it’s something the government and big business need to sort out in regards to global warming.

“What can we be expected to do about it? Even if everyone in the UK stopped using their heating and driving cars, I don’t think the reduction would be enough to make a dent on what fishing and intensive farming etc. does.

“If the city keeps flooding and the government does nothing then people will likely be stranded or killed. People will have their lives ruined if they lose all their possessions. That’s on the government.

“I live on the first floor so it’s fine, I will just buy a boat.”

Tattooist Jonny Hides, 38, of Shirland Road, Maida Vale, said: “Houses on my road flooded a few weeks ago when we had those big storms. We had about a month’s worth of rain in 24 hours.

“It was so bad, all the basement flats on my road got flooded in about half an hour. It reminded me of the flooding we see in Sheffield, where I am originally from. I don’t know if that was just a one-off freak storm.

“If I am still living in London in the next 10 years I think the flooding would be a factor to consider when deciding where I live. I think it could be a reason to leave the city. I don’t know how people will be able to afford it.

“House prices in London are already so high, if you had flood risks on top it will just make it even worse. The insurance will be so high.

“I wouldn’t be surprised if some basement flats are already getting harder to sell or rent after the recent flooding. If it’s happened once, it could happen again.”