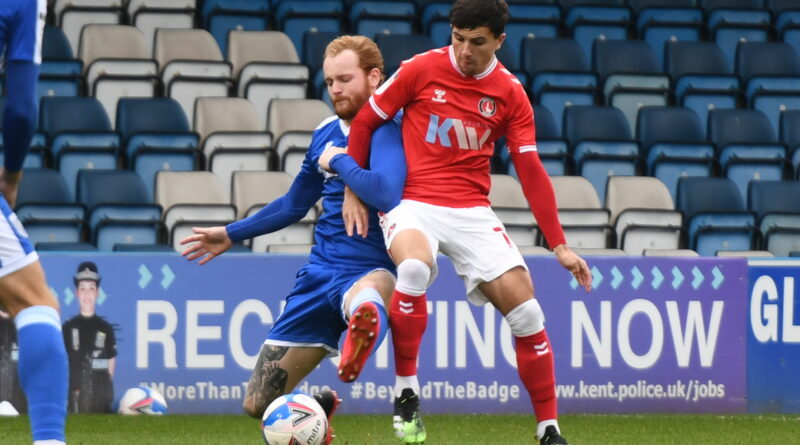 Charlton midfielder Albie Morgan reckons the Addicks played their best football all season during the 1-1 draw with Gillingham on Saturday.

The South Londoners saw 69 percent of the ball during the visit to Priestfield but had to settle for a point after Chuks Aneke cancelled out Jordan Graham’s opener – both goals coming inside the final 20 minutes.

The hosts broke the deadlock from the penalty spot after Chris Gunter was adjudged to have tripped John Akinde. Conor Washington had already missed a first-half spot-kick for Lee Bowyer’s side, but the visitors rescued a draw as Aneke finished from close-range seven minutes from time.

Morgan, 20, said: “A tough game. A tough one to take. A draw is obviously not what we wanted but as a team I think we can look at that as a positive in terms of performance. We played our best football I think for a long while, especially this season. I think we can take a few positives from it. Obviously, the draw ain’t the best but a lot to be happy about going into Tuesday [away at Burton Albion].

“The amount of chances we had, the amount of possession, I think we dominated from start to finish. Especially second-half. Tough but I think there’s a lot of positive to take from this. Hopefully we can kick on and not let this affect us on Tuesday.

“I think, most of the lads will agree as we’ve just watched it back right now, there’s minimal contact [between Akinde and Gunter] at all. Things like that really are frustrating. When you look back throughout the game there’s been decisions for both teams that could have gone either way and you think I don’t know whether that was a booking or a foul.

“These things happen in football, you’ve got to expect that. Maybe finish our chances more, finish the attacks off and then we don’t have to look back and think should he have given that.”

Washington’s failure from the penalty spot came after Omar Bogle was felled inside the area. The Northern Irish international is the Addicks designated penalty taker but Bogle had to be persuaded by assistant manager Johnnie Jackson before handing the ball over to his teammate.

Morgan said he understood why Bogle, who is yet to break his scoring duck for the Addicks, wanted to take on the responsibility from the spot.

“Unfortunate that Conor has missed today but I’m sure he’ll be confident enough to take the next one and the one after that. As a team we’re strong, we’ve spoken about it, moved on and hopefully we can take the positives and move on to the next game.”

The result extends Charlton’s unbeaten run to eight league games and leaves them sitting fifth in the League One table – just four points off leaders Hull with at least one game in hand on all the sides above them.

Morgan thinks the South Londoners are well-placed for a charge towards promotion.

“As a team we know where we want to be next season and that’s in the Championship,” he said.

“Whether that means automatics or through the play-offs again I think we’re more than happy to do that but as a team we feel like we’ve got enough quality to really push for automatic. Keep putting in the performances that we’re doing and I’m sure we can get there.”