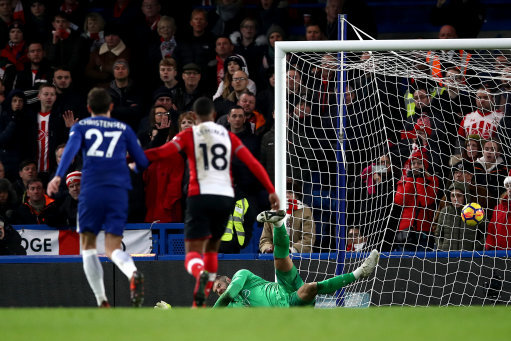 A Marcos Alonso beauty of a free-kick was all that separated Chelsea from Southampton at Stanford Bridge this afternoon.
The left-footed curler on the stroke of half-time, bent round the Saints defence and beyond the desperate outstretched arm of goalkeeper Fraser Forster.
Despite the numerous chances to add to the solitary goal, the Blues lack the killer touch up front.

With the title way beyond them, Chelsea are now playing for a top slot as the best of the rest.
That was reflected in the starting line-up.
Chelsea started within greater energy than they did a week ago against West Ham United. However with strikers Alvaro Morata and Michy Batshuayi on the bench, head coach Antonio Conte opted for a ‘false No9’ with Eden Hazard, Pedro and even Marcos Alonso occupying the top slot in the opening phase.
A swift break by the Saints on nine minutes almost reaped dividends when ex-Blue Ryan Bertrand cut a byline cross that Thibaut Courtois missed, Gary Cahill, at the second attempt, managed to clear the ball before in-running Manolo Gabbiadini could strike.
Willian missed a golden opportunity on 15 minutes. Excellent interchange work between the Brazilian and Alonso, set up Willian for a strike on goal, but he screwed his curling right-footer wide of Fraser Forster’s left upright.
Shots by Gary Cahill and a deflected effort by N’Golo Kante forced Forster into a couple of ‘Hollywood’ saves as the Blues started to take control of the game, but not the score.
The Saints continued to be a threat on the counter-attack.
A fine break orchestrated by Pedro, saw the ball zipped to Hazard, who jinked into the Saints area, slid the ball to Willian, but on this occasion, the wide man was caught napping and dispossessed before he had a chance to get a shot away.
Alonso was next up to threaten the opposition’s goal. Good byline work by Willian fed the Spain wing-back and his quick, right-footer was on target, but, again Forster was at his near post to parry the ball away for a corner.
Oriol Romeu appeared to haul back Andreas Christensen in the penalty area as Hazard put in a deep cross, but referee Roger east ignored the justified pleas.
The post was next up to save the Saints as Pedro’s low drive took a little nick off Jack Stephens and the the post.
On the stroke of half-time the deserved goal for the home side came. And it was the trusty left boot of Alsonso, from a free-kick, 25 yards away that saw the Blues into the changing room with a smile.
Hazard had ben upended by Maya Yashida and Morata fired a curler around the wall and beyond the desperate dive of Forster and the ball nestled in the right-hand corner of the goal.
There were no changes by either side at half-time. But on 60 minutes Charlie Austin entered the fray and within seconds forced Courtois into his first save of the game.
This was countered by Conte on 68 minutes when he brought on Cesc Fabregas for Pedro. This was followed by Morata coming on for Hazard.
He forced Forster into a save within seconds.
But it was the saints at this point with 15 minutes on the clock who look the greater threat.
An opportunistic effort by Fabregas, which saw him clip the ball along the Saints’ goal line.
Sadly Morata was still on the floor whinging about the foul on him, rather than getting back up and into the action.
Fabregas forced yet another save from Forster late on, as the Blues were ultimately gradual to win the match.
Next up is a Wednesday visit of Bournemouth in the Carabao Cup to the Bridge.