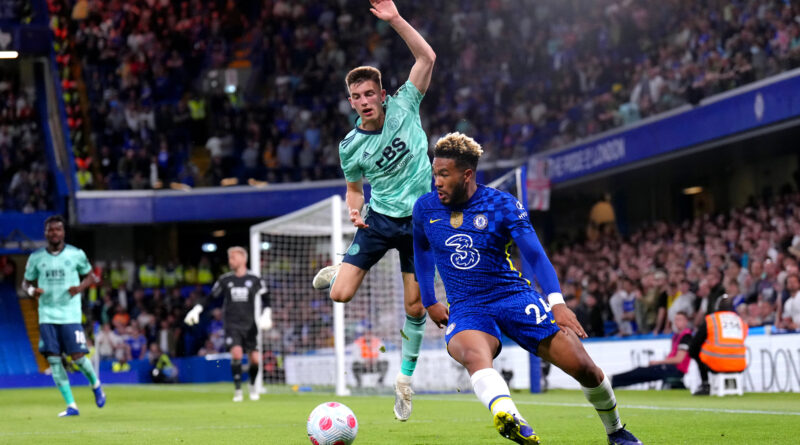 The significance is twofold – the point ensures, barring a massive goal swing, third place in the Premier League and Champions League football next season.

It also demonstrated to watching Todd Boehly, who is heading the consortium buying the club, that significant investment is required in the team if they are going to get close to challenging Manchester City and Liverpool next season.

Boehly has yet to be at a game where his new team has won.

In truth, that was two highlights of an otherwise tired encounter.

But occasional rarely translates into anything worthwhile.

Both sides have one game left, the Blues are at home to Watford on Sunday.

Chelsea started the brighter, their passing was crisp and accurate.

Just a shame that wasn’t the case for Hakim Ziyech after four minutes when, he sliced a low left-footer from the edge of the Foxes penalty area wide of Kasper Schmeichel.

Seconds later a long, long kick by the Denmark goalkeeper found Jamie Vardy, who had got between Marcos Alonso and Thiago Silva in the left back slot.

He cut the ball back to in-running James Maddison, who took one touch before ramming home the ball past Mendy.

Trevoh Chalobah forced a finger-tip save from Schmeichel on 10 minutes but the long-range effort was parried over the crossbar.

A wayward header from Silva from a clipped Ziyech cross sailed high and wide over Schmeichel’s crossbar on 32 minutes.

Chelsea had lots of possession, but very little output as they struggled to make any sort of inroads against a well-drilled Leicester City.

But a moment of inspiration 11 minutes from the break saw the equaliser.

A wonderful chip by Reece James fell invitingly to Alonso, who produced a sizzling left-footed volley from the edge of the six-yard box on the left and smashed the ball with venom past Schmeichel.

A couple of shots from long range by Ziyech enlivened an otherwise drab start to the second half. But the Leicester stopper was more than equal to the task of snaffling the efforts.

Another of his crosses, this time on 61 minutes was met on the head by Romelu Lukaku, but the Belgium striker’s glancing effort went wide of goal.

Christian Pulisic then missed the chance of the game when he was set up by Lukaku, but somehow screwed his shot wide of goal.

Head coach Thomas Tuchel had seen enough and decided to make a double substitution – on came Cesar Azpilicueta and Ruben Loftus-Cheek and they replaced  Pulisic and N’Golo Kante.

Kai Havertz entered the fray on 75 minutes – Lukaku was taken off.

But they failed to raise the tempo of the game and it petered out.