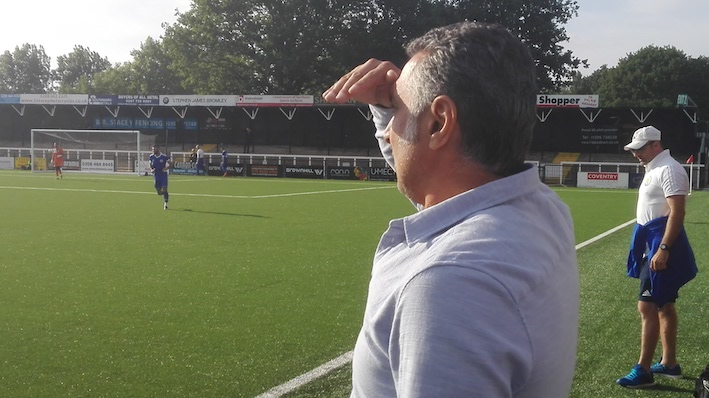 The latter – representing ethnic Armenians living in Turkey – had found themselves down to ten men just ten minutes in, after Raffi Kaya saw red for fouling Arthur Györgyi on the edge of the Armenian area, but the fun really started midway through the opening half.

With the dominant Székely Land team showing a distaste for physical contact it was an Armenian – Vichen Valenza-Berberan – who went down in the 24th minute, screaming for all the world as though he was going to lose his leg. A quick squirt of the miraculous spray carried by the Armenian physio prompted a remarkable recovery but ten yards away an unidentified member of the Armenian coaching staff had got involved in a row with the small band of Székely fans and slapped one of the raucous supporters before being banished from the ground.

Fair play and bringing the game back to its roots are the stated aims of the alternative world cup. ‘Everyone has a friend in the CONIFA family’, was the message of the master of ceremonies at Thursday’s opening ceremony – but that all went out the window at Bromley as the football disappeared under a welter of outrageous play-acting. For a 10-minute spell the Székely Land players – ethnic Hungarians living in Romania – went down like ninepins, as though they were playing in slippers on a sheet of ice.

Somewhere among the chaos, Székely Land took a 35th minute lead, Csaba Csizmadia lobbing the ball back into the area from the left for Tankó Zsolt to spin and fire home as the Armenians appealed in vain for an offside flag.

A fractious half fittingly closed with Armenia’s Artur Yedigaryan escaping sanction for slapping opponent László Szõcs in the face after another mass coming together over a non-existent foul.

Both sets of players took their simulation up to world class level during the second half, Székely Land goalkeeper Nagy Barna kicking things off after an aerial duel by stepping back a yard upon landing to ensure he would go over the outstretched leg of David Hovsepyan.

Not to be outdone, Armenia’s David Azin performed an impressive triple-pike-and-scream only for Székely Land’s Magyari Szilárd to counter moments later with an even more high pitched yelp.

Matters came to a head when Szilárd and Hirac Yagan dived into a 50-50 challenge and a predictable scream-off ensued, although the Armenian at least limped off as a result – although that would not prove his final contribution to the evening.

Attila Csürös gave the Armenians an Ararat to climb by heading home in the 62nd minute and teammate Balázs Csiszér celebrated with the most delicate, balletic dive of the game two minutes later.

Mercifully, Székely Land’s third goal – in the 67th minute – brought an end to the tit-for-tat cheating, László Hodgyai breaking down the right with the Hungarian attackers three on one and crossing for Fülöp Lóránd, in acres of space, to apply the coup de grâce.

The injured Yagan, on the pugilistic Armenia bench, wasn’t happy and expressed his disgust in such terms to the officials that he was red carded and forced to clamber over the perimeter fence and hobble away.

Székely Land’s Barna pulled off an impressive point-blank save to deny substitute Jules Tepelian – albeit after spilling Rafael Safaryan’s harmless looking effort from distance – before Yedigaryan committed one of the game’s few genuine fouls and, having already been booked for dissent, should have seen red until the official realised, and kept his card in his pocket.

Székely Land substitute Barna Bajkó made quite an impact, missing a good opportunity within seconds of his 83rd-minute introduction and then scoring the easiest of goals four minutes from time as Safaryan’s wayward backpass eluded Armenia goalkeeper Gevorg Kasparov and bounced off the foot of the post to give target man Bajkó a simple tap-in.

That infuriated Armenia, who should have finished with eight men after Azin gave himself a good long run-up before hurtling in two-footed to clean out Csiszér near the halfway line two minutes into added time.

But by that stage the official probably needed to give his card-arm a rest.