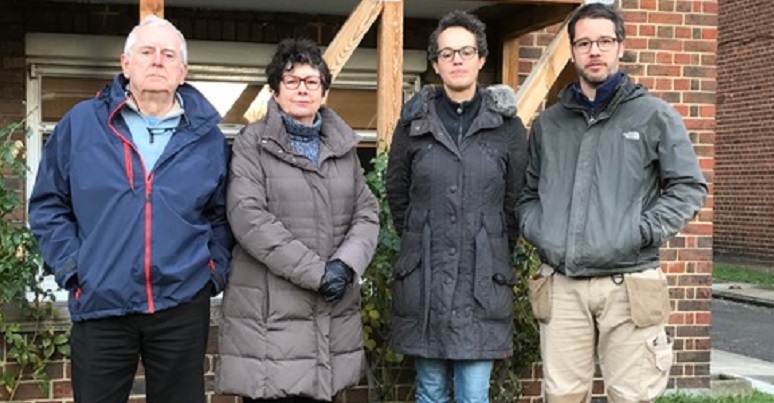 Residents fear for the safety of their blocks of flats because of 20 years of delays to crucial repairs.

Herne Hill’s Dorchester Court residents are angry their freeholder is pursuing redevelopment plans rather than essential repairs. But the freeholders Manaquel Company Ltd say they are adding flats to the blocks to finance repairs and maintenance work.

The early 1930s Grade-II listed blocks are on Historic England’s Heritage at risk register, which records sites at risk of loss due to neglect, decay or inappropriate development.

One Dorchester Court resident said: “There are several dangerous structure orders at Dorchester Court, and the balconies are so unsafe, most are propped up with heavy wooden cages designed to stop them collapsing.”

Resident Sally Beck said: “The steel structure of the building is rotting because water has been allowed to get into the brickwork through balconies pulling away from the walls and poor pointing.

“All our leases state that it is the landlord’s responsibility to keep the buildings in good repair and to decorate windows and common areas every seven years.

I’ve been here for 20 years and the windows have never been decorated and the common parts have been painted once.”

She said: “The high cost of repair is entirely due to decades of neglect and lack of maintenance.

The flats are unsaleable because of the outstanding repairs and if leaseholders have to move, they have no choice but to sell cheap to Manaquel.

“The redevelopment does not benefit residents in any way. It will mean more people in the court with no extra facilities provided for them.~

“Manaquel’s proposals lacked any meaningful detail so it was hard for residents to judge them.”

The DCRA insists refurbishment must take priority over redevelopment work.

One resident said: ‘‘Instead of developing the roofs, the landlord should repair the court which Lambeth council’s building control have told us they consider to be a visual blight on the local community.”

Manaquel wants to build 16 apartments on top of Dorchester Court’s eight residential blocks but the rooftop spaces were awarded a lawful development certificate (LDC) by Lambeth council on February 11 preventing work from going ahead without leaseholder consent and declaring the spaces a legal amenity.

But Manaquel is now challenging in the High Court the council’s redevelopment ban to the roof spaces. Manaquel representative Mervyn Mandell said the development on the estate is to deliver rooftop apartments on all blocks to contribute towards funding the high cost of estate regeneration.

Mr Mandell said Manaquel was very keen to submit the application and undertake the works if permitted. He said: “The original design and 1930s construction of Dorchester Court means there are inherent structural design defects that need to be repaired.

“The current status is that viability discussions with the council and the legal challenge to the certificate decision are ongoing, and until such time as more is known on these issues the formal application submission is paused.”

Residents have been banned from the rooftops since last December, although Manaquel claims any access for people living there was blocked before 2008.

The firm also claims amenity space for residents will be included in its application, though such details have not featured in the project designs lodged with the council so far.