You never see a tractor in Southwark – then suddenly a bunch of them come along at once.

There was one big red one – but the rest were balloons – being carried by vegan campaigners.

They looked like they were pretty fed up, too – perhaps because of all the vegetables they’ve been eating all month.

The event follows a two-year investigation of Hogwood Farm – a pig farm approved by Red Tractor.

Earlier this month, Viva! Campaigns’ investigation of Hogwood Farm was featured in an episode of Channel 4 Dispatches.

The undercover investigation of a farm showed scenes of animal suffering; overcrowding, and dying animals dumped in gangways.

Viva! Campaigns reported the farm to the government’s Animal and Plant Health Agency, Trading Standards, RSPCA, Red Tractor and one of their biggest buyers Tesco. 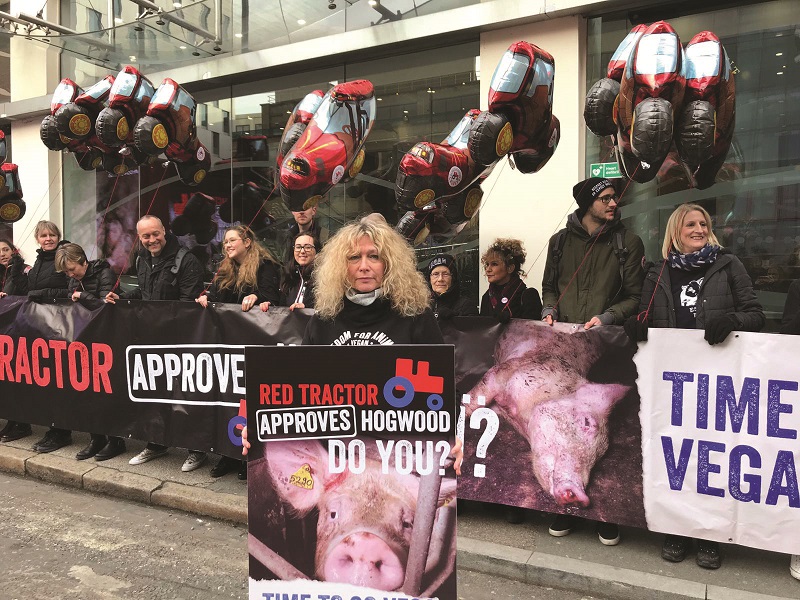 Viva! held a peaceful demonstration outside Red Tractor’s Headquarters and then moved onto a Tesco Express store in Trafalgar Square.

They broadcast footage from the farm from their video van and talked to the public by the campaign’s own red tractor.

Red Tractor claims to have increased unannounced inspections. Its pre-arranged inspections take place once every 12 – 18 months.

Viva! founder and director Juliet Gellatley said: “Red Tractor is nothing more than a clever marketing tactic employed by the animal agriculture industry. “They require little more than the UK and EU legal minimums and still allow cruel practices such as tail docking, teeth clipping and farrowing crates.

“These assurance schemes are designed to mislead consumers about the realities of intensive factory farming and clearly care more about profit than animal welfare.

“Consumers are led to believe that the UK has the highest animal welfare standards in the world and yet time and time again, our undercover investigations have revealed the shocking reality of Red Tractor approved farms.

We have witnessed an appalling lack of enrichment, filthy barren sheds and animals simply dumped and left to rot in gangways. The routine suffering of pigs on an industrial scale in Britain is unacceptable, and should not be approved by anyone.

“Sadly, many of the conditions we show in our investigations are legal and this is the heart-breaking reality of intensive factory farming.

“Consumers have the right to know where their pig meat is coming from and this is the best way to have our voices heard.

We are joining forces with vegan campaigner Cath Kendall to show Tesco and Red Tractor that we haven’t forgotten about the barbaric conditions on Hogwood Farm.”

A Red Tractor spokeswoman said; “Our main priority was to ensure the safety of our hard working dedicated team and also that of people that work in and around our building going about their daily business.

To that end we met with the police to put measures in place to safeguard the physical and mental well-being of our team.” More information about Hogwood Farm can be found at viva.org.uk/hogwood