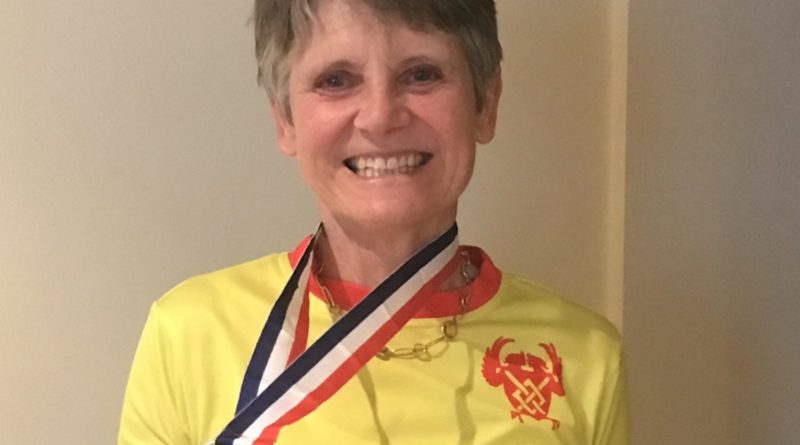 Anna showed her fine versatility by switching from the boards to a tough cross country course in Corwen to take the British Masters women’s over 65 title covering the six kilometres course in 28 minutes. She beat the favourite Sue Hallam from Scarborough by a comfortable 14 seconds.

The delighted Hercules Wimbledon runner said after her victory: “I really loved the course.  It was fast and undulating with a couple of short testing hills.  There were some boggy bits and some mud plus my favourite – a stream which we went through twice.”

She added:  “I overtook my oppo by going straight through it and jumping up onto the bank ending up well ahead of her.”

The day after her victory, she went out on a short training run from her Southwark home on Sunday morning in the rain. Her win in Wales continued her fine start to 2020. It began with her winning the South of England over 65 indoor 1500m title at Lee Valley last month.

Her Hercules Wimbledon clubmate Peter Giles was also in action in her race in Wales, competing in the men’s over 75 category. A week after taking a hat-trick of gold medals in the British Masters indoor championships, he was just pipped for the title. Racing over the same 6km course, he clocked 28:58 and was just beaten by six seconds by the winner Jeff Norman from Altrincham.

Despite the cancellation of various running events due to the coronavirus epidemic, Hercules Wimbledon runners were also in action in Bath, Hyde Park, Liverpool, on Wimbledon Common and in various other parkrun events.

Schoolmaster Jonny Cornish raced to a lifetime best of 1:05:16 in finishing third out of more than 6800 runners in the Bath half-marathon on Sunday. He was just a minute behind the winner, Irish international Paul Pollock. His time showed a big improvement on his previous best for the distance of 1:06:58 set in winning the Virgin Sport Hackney half-marathon in East London in May last year.

Another leading finisher was Hercules Wimbledon’s Alex Milne who also posted a lifetime best in finishing sixth in 1:06:08. His time took half-a-minute off his previous best set in winning the Worthing Running Festival half-marathon on the South Coast in February 2019.

Two Hercules Wimbledon youngsters were in action in the English Schools cross country championships in Sefton Park, Liverpool, on Saturday. Georgie Clarke helped London to the intermediate girls silver team medals. She was the fifth London finisher taking 65th place in 13:39. Surrey champion Ellen Weir helped Surrey to the team title in the same race. She was 110th of the 335 finishers in 14:02.

Hercules Wimbledon’s Tom Cheetham, who was planning to run in the now postponed London Marathon was just pipped for the veterans over 50 prize in the Hyde Park Spring 10km road race in Central London on Sunday. He finished second in his category in 41:36, 29 seconds behind the top over 50 finisher, Paul Burkett from Salford.

Thirty-six Hercules Wimbledon runners were in action in various parkrun events on Saturday with 14 of them racing on Wimbledon Common. Top finisher was Edward Charlesworth who was seventh of the 296 finishers in 20:23. It was his 38th parkrun on the common. In contrast, Hercules Wimbledon supervet Lisa Thomas completed her 295 Wimbledon Common parkrun in finishing seventh in the women’s race in 24:20.

Hercules Wimbledon’s Nick Thomas headed home a 319-strong field in Brockwell Park in a personal best of 16:14. He sliced eight seconds off his previous best set in December. Clubmate Chris Ore was ninth in 19:18. Matthew Sharp was third out of 445 runners in Dulwich Park in 15:55, just 10 seconds outside his best time for the course set in September 2017.

Andy Parker was fifth out of 388 runners on his debut appearance in Stratford-upon-Avon in 17:46 while Grace Eminson was sixth in the women’s race in Fulham’s Bishops Park where her Hercules Wimbledon clubmate Charlotte Lam was ninth.

This weekend’s South off England road relay championships at Milton Keynes on Sunday, in which Hercules Wimbledon were planning to field two teams in the men’s 12-stage race, have been cancelled due to the coronavirus epidemic.