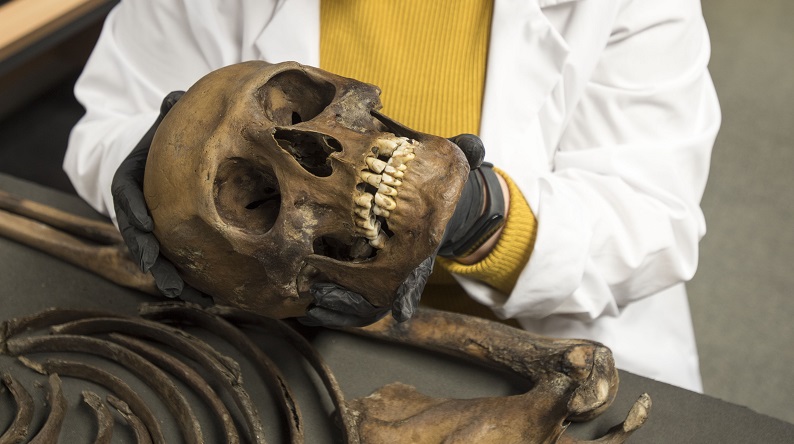 Forget Timberlands, Dr Martins or Uggs – the most durable boots on the planet may be 15th Century waders.

Archaeologists have found the body of a man in Bermondsey who may have fallen to his death in the Thames, judging by the arm which is thrown above his head.

But the only item of his clothing which has survived 500 years in the earth by the river is his thigh-high leather boots – 300 years before the invention of rubber Wellingtons.

The man was found lying on his front, head twisted to the side, by teams working on the Thames Tideway tunnel, the so-called “super-sewer” currently being built to update the capital’s Victorian sewage network.

It’s possible he may just have had one too many.

The skeleton was uncovered during the construction of a shaft at Chambers Wharf, where one of the main tunnel boring machines digging the super sewer is due to start tunnelling next year – and where the medieval Bermondsey Wall once stood.

His clothes had decayed to nothing, but on his feet were a pair of rare knee-high leather boots, made of leather stitched together with waxed flax thread.

They have flat soles reinforced at the front and back which would date the skeleton to the late 1400s or early 1500s at the latest.

Leather was expensive and often re-used at this time and experts believe it is unlikely that someone would have been buried wearing such a highly-prized item.

Ms Richardson said: “Leather can be very well preserved in London, especially if it’s found in a ditch that would have been full of water, or near the riverfront.

“But what is unusual about these boots is that we never find high boots like this – they are always shoes or ankle boots.

High boots are just not very common throughout medieval times and through to the 17th century. They are not fashionable at all – they haven’t got buckles or anything like that. They are just practical, everyday boots.”

They may be waders, making it possible the man worked in or around the river as a dock worker, mudlark or fisherman.

Mariners of the time were known to wear long boots, according to Ms Richardson – a large number were found on the wreck of the Tudor warship the Mary Rose.

Conservation work to preserve the leather continues so there is no immediate plan to put the boots on display.

Plant matter found inside the boots is yet to be analysed, but the archaeologists suspect it was moss, added to keep his feet warm.

Evidence of extensive degenerative joint disease along his spine and left hip joint show he lived a physical life and would have suffered pain every day from osteoarthritis, according to Niamh Carty, an osteologist.

She believes he was probably much older than 35. He also has distinctive grooves in his teeth. She said: “This is a possible indication of pulling some sort of material over the biting surface of the teeth or holding an object in the teeth for prolonged periods of time.”

One possibility is that he was pulling rope between his teeth, like a fisherman.

Jack Russell, archaeology lead for Tideway, said: “The Tideway archaeology programme has allowed us to gather really interesting new evidence for how Londoners have used the river throughout history.

“As we work towards our goal of cleaning up the Thames and reconnecting London with it, it’s really important to acknowledge the lessons we can learn from significant discoveries like this.”