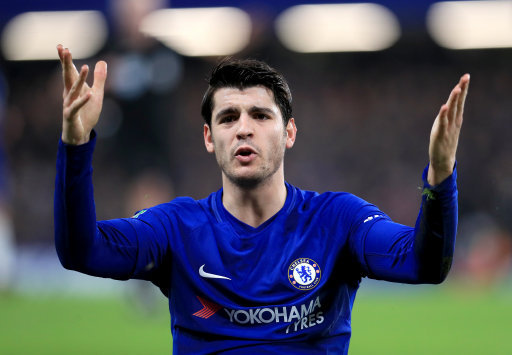 Arsenal have the advantage as the north Londoners prevented Chelsea from taking a lead in the first leg of the Carabao semi-final tonight at Stamford Bridge.
The visitors were more than happy to sit back and frustrate the Blues, who had misfiring Alvaro Morata leading the line as the game failed to ignite – 0-0 was a deserved result.
The Spain hitman is out of sorts and struggling with confidence and his replacement Michy Batshuayi failed to capitalise on the opportunity given to him either.
Too many Chelsea players were short of their top game – Eden Hazard, Danny Drinkwater in particular.
The sideshow of having Arsenal boss Arsene Wenger sitting in the press box was only more marginally entertaining.
The second leg, in two weeks‘ time – hopefully will be better.
Morata had an early chance for the Blues – but he shot into the side-netting.
Arsenal’s Jack Wilshere produced a superb defence-splitter of a ball on 20 minutes which went straight to the feet of in-running Alexandre Lacazette. But the striker’s shot was wayward.
David Ospina had to grab the ball at the second attempt when a left-footer Victor Moses drive bounced off the goalkeeper’s body.
Thankfully he retrieved it just before Eden Hazard got to it.
The Blues hit the post on 28 minutes when another Moses effort clipped the base of Ospina’s left upright.
The ball was then cleared.
Alex Iwobi had an excellent chance to score but found Thibaut Courtois in fine form, parrying away the the snap shot from the striker.
Fabregas had an excellent chance to open the scoring on the stroke of half-time. Cesar Azoplicueta sent in a curler and Fabregas,,alone in the six-yard area, headed the ball, somewhat weakly straight into the midriff of Ospina.
The Blue stop off the brakes in the early stages of the second half, Andreas Christensen heads over from close range after a headed knock-on by Marcos Alonso.
Morata had a fine long-range shot well saved by Ospina on 56 minutes.
Moses had an excellent effort goal-bound but Shkodran Mustafi tipped the ball away for a corner. From the resultant kick, Christensen was once again remiss in heading wide.
Danny Drinkwater’s poor night ended with 24 minutes left, Willian replacing the midfielder.
Eden Hazard hasn’t done much in the second half and was justifiably replaced on 83 minutes by Tiemoure Bakayoko.
He was quickly followed on to the pitch by striker Michy Batshuayi – on for ineffectual Morata.
But that was it.
Chelsea face Leicester City in the league, at the Bridge, on Saturday.