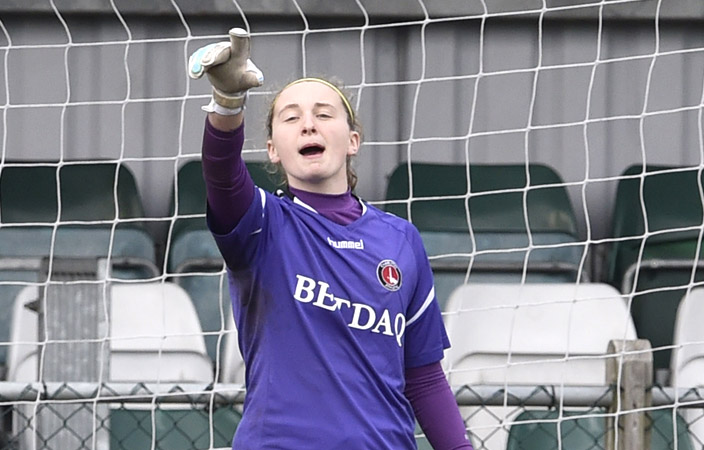 The game may have been a repeat of the 2007 final, but the different paths the two clubs have taken since then meant this was always going to be a huge task for Riteesh Mishra’s part-timers against one of Europe’s elite sides.

Charlton, the lowest ranked side left in the competition, battled away for the duration but were ultimately unable to deal with the hosts superior quality. The South Londoners will now be left to concentrate on securing the Womens Premier League Southern Division title.

The Addicks’ hopes of frustrating their illustrious hosts in the opening exchanges were slashed after just four minutes. Winger Olivia Lukasewich was guilty of a mistimed challenge just inside the Charlton box, with referee Josh Smith pointing straight to the spot. Kim Little dispatched the spot-kick beyond Katie Startup to give the Women’s Super League 1 outfit an early lead.

But for all the possession that the home side enjoyed – and inevitably there was a lot of it – the well organised Addicks side limited the Gooners to mainly speculative efforts for long spells of the first period.

Katie McCabe’s low cross rebounded off the near-post before the Arsenal winger was involved again – her deep cross nodded down for Jordan Nobbs to fire over the bar from 20 yards.

The South Londoners, who had already beaten QPR, Ipswich, Blackburn and Cardiff en route to the quarter-finals, had the tireless Kit Graham – making her 200th appearance for the club- leading the line on her own, and it was her persistence that led to their first corner as we approached half-time.

Nicole Pepper’s set-piece forced Anna Moorhouse into an awkward punch over her own bar under pressure, but it was back to business as usual soon after as Startup was forced into two smart saves just before the interval. Nicole Carter’s angled effort was tipped over by the England u19 international, who then held on well as Little tried her luck from the edge of the area.

Danielle van de Donk rattled the crossbar from distance early in the second-period, but the hosts did double their lead ten minutes after the restart as Heather O’Reilly battled her way into the Addicks area and lashed past Startup.

Two became three moments later when substitute Vivianne Miedema powered home a header at the near-post as the gulf in class between the professional Gooners and part-time Addicks began to show.

The crossbar was struck for a second time as Miedema cut in and fired against the woodwork from inside the area inside the final eight minutes, before Danielle Carter added further gloss to the score line – diving in to head home from close range.

And the scoring was completed in spectacular style when Nobbs picked out the top-corner from 25 yards out with the final kick of the game.