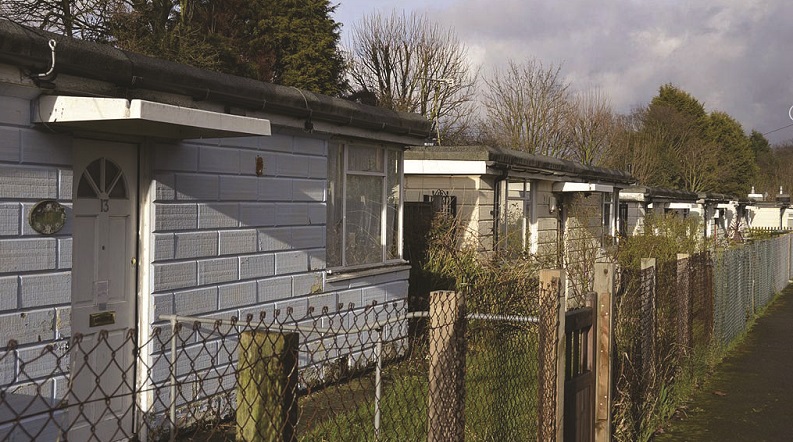 Families living on a doomed asbestos-infested estate have demanded a probe as they claim its demolition contractors are suddenly wearing anti-contamination suits for the first time.

Residents are currently being slowly moved off the historic Excalibur Estate in Catford – the last surviving neighbourhood of 1940s prefab bungalows in Europe.

They have been moved to new blocks nearby where they could watch the demolition. But they were horrified to watch as anti-asbestos-contamination tents and overalls started to be used last month, even though they claim up to 40 of the houses had been bulldozed already during phase one, from 2014, and another eight in phase two, which started six months ago.

They also claim they were never told how much of the dangerous substance was there – though town hall chiefs and the housing association organising the demolition have produced a letter it says it circulated to residents in 2014.

Lewisham council and L&Q say the new anti-contamination measures are just a precaution only, after asbestos was disturbed in the recent work, and have explained the safe methods used.

The Health & Safety Executive (HSA) had also inspected and approved the work. Tenants were also told in the 2014 letter they could call council officers if they had further concerns and wanted reassurance about the anti-contamination measures and the HSA report.

But resident Paul Newman, a retired boxing coach, claimed he was never told about the dangers. “I know of two people who moved here and had breathing problems which cleared up when they moved off.

“We always said the demolition should be done properly. “You can’t tell if you have breathed in the dust – it starts affecting your lungs decades afterwards. “When the first phase of the demolition was done, some of the materials were put in a big skip.

“Now, suddenly, in the last month, an asbestos contractor is there. And yet for the last 25 years, I have been regularly reassured it was okay to live here.

“My neighbour told me there was asbestos around the chimney stacks and the boilers when I moved in, in 1996. “You can see it around the utility cupboards in every house. One time I got British Gas in for some work but they would not touch it.

“When the residents took over running the estate I asked for it to be removed safely. “And yet the first phase of the demolition in 2014 and the start of the second phase recently there were no tents or overalls. “The only thing separating the disturbed asbestos from a nursery centre in Baudwin Road was hardboard hoardings.

There are 20 kids there playing yards away every day. “There are also 50 family homes backing onto the site in Hazelbank Road – along with the Downham Estate.”

Lewisham sent a 2014 letter assuring residents the demolition and the asbestos was safe, but the South London Press spoke to eight tenants and leaseholders who said they had never been formally told.

Retired paramedic James Solway, who arrived in 1995, said: “I had an interview before I was allowed to live here and was told the asbestos had been removed. “If it is not moved, it is safe. But no one was told.

“Lewisham council have failed to formally inform tenants of any risks these homes on Excalibur Estate may have posed. No such information has been forthcoming from the council since it took charge of the prefabs from 1965, or that the prefabs may had been dangerous to live within as they became older.”

Dave Baldwin, a resident of 18 years, said: “I was never notified. The only way I found out was a neighbour telling me.”

A spokeman from the nearby Camelot pre-school said: “We have received reassurances from Lewisham council that these building works present no risks to children and staff at the pre-school.

The health and safety of the children in our care is always at the forefront of our minds, and parents have been kept up to date with developments.”

An L&Q spokesman said: “After the buildings were vacated, there was some disturbance to the asbestos-containing materials. “We obtained expert advice which recommended controlled working conditions for the removal of asbestos, with the erection of work enclosures and protective tents.

This is a preventative measure and there is no risk to the residents.” The council stressed it had written to residents in 2014 and invited anyone with concerns to call its offices.

A spokesman for Lewisham council said: “The council has always worked closely with residents in managing their homes on the Excalibur Estate in the knowledge of the presence of asbestos.

Both L&Q and the council have written to the residents and will continue to work with them on this matter until the new development is complete.

“When intrusive work to the properties is required and when demolition takes places, specialist contractors are used to carry out works with the health and safety of our residents being of paramount concern.”

A 2010 ballot asked residents what they wanted to happen to the estate. More than 56 per cent (114 votes) were in favour of the estate’s regeneration while 89 people were against the proposals and 21 did not vote at all.

English Heritage has granted listed building status to six of the “prefab” houses on the estate, which was built after Lewisham lost 1,500 homes in the Blitz.

Do you worry you have asbestos in your home or workplace? Call the South London Press on 03300 580 680 or email toby@slpmedia.co.uk

For more information on its dangers, see https://www.mesothelioma.com/.