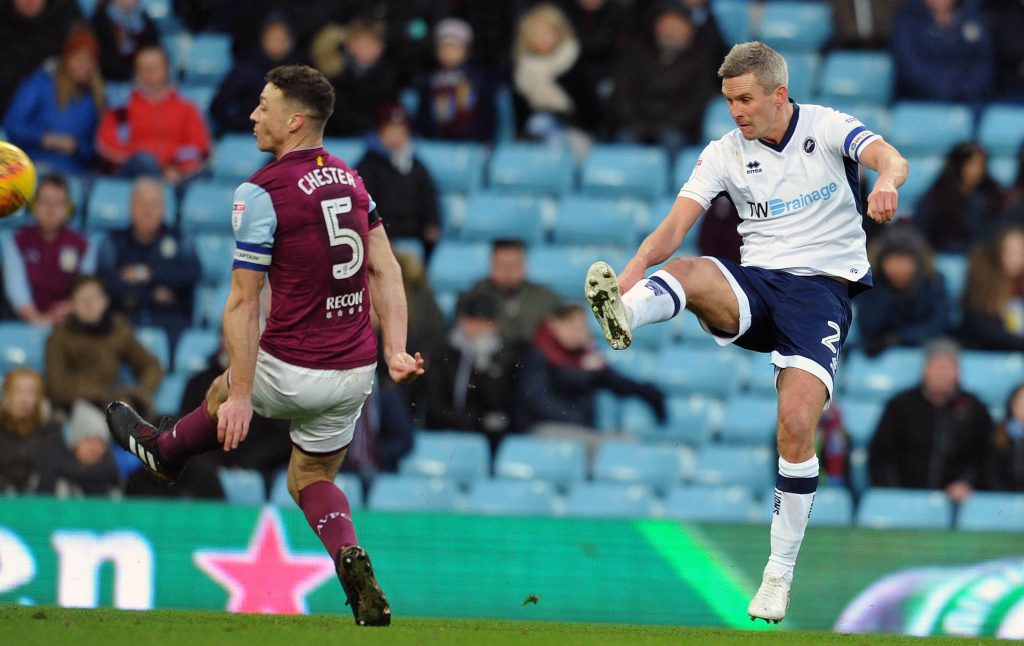 As expected, the high-flying hosts started on the front foot with Harris’ men keeping compact and not allowing Villa any headway in attack.

The Lions looked full of steely determination on a cold afternoon at Villa Park.

With Villa seeing more of the ball in the early stages, hitting the hosts on the counter-attack looked to be the gameplan.

On 14 minutes that plan almost came to fruition when the Lions broke and faced a four-on-two scenario, Lee Gregory was denied by an onrushing Sam Johnstone in the Villains’ goal.

Just 10 minute later and the counter-attack looked likely for the Lions but Johnstone was again the hero for the hosts when O’Brien played a beautiful dinked ball into the path of Jed Wallace, but the foot of the keeper denied the visitors the opening goal.

Villa had plenty of the football but were unable to muster much in the way of an attacking threat.

Keinan Davis had a sniff but thanks to a last-ditch tackle by Jake Cooper, the danger was snuffed out heading into the interval.

Millwall were able to stay organised and composed with and without the ball as the second half progressed.

O’Brien has a low effort gathered up by Johnstone just after the hour mark.

The Lions looked more dominant and were piling pressure on the Villa defence with Gregory having a glorious chance to snatch it in the final 15 minutes.

The striker found acres of space down the left flank and was fed in as he darted down the left hand side. Cutting in, the forward saw his shot smack against the crossbar as the Lions second-half dominance was almost rewarded.

Minutes afterwards, Gregory saw a glancing header fall into the arms of the Villa keeper after Cooper’s initial flick on.

Debutant Martin pulled off a fine save low to his left as Villa sub Jack Grealish bent in an effort from outside the box.

Shaun Williams was introduced in the 88th minute for his first appearance since September following injury.

The Lions battled to a deserved point to a Villa side who have only lost once at home this campaign.

Although Harris’ men are still looking for a first away win of the season, after Saturday’s showing, one can’t be too much further away.