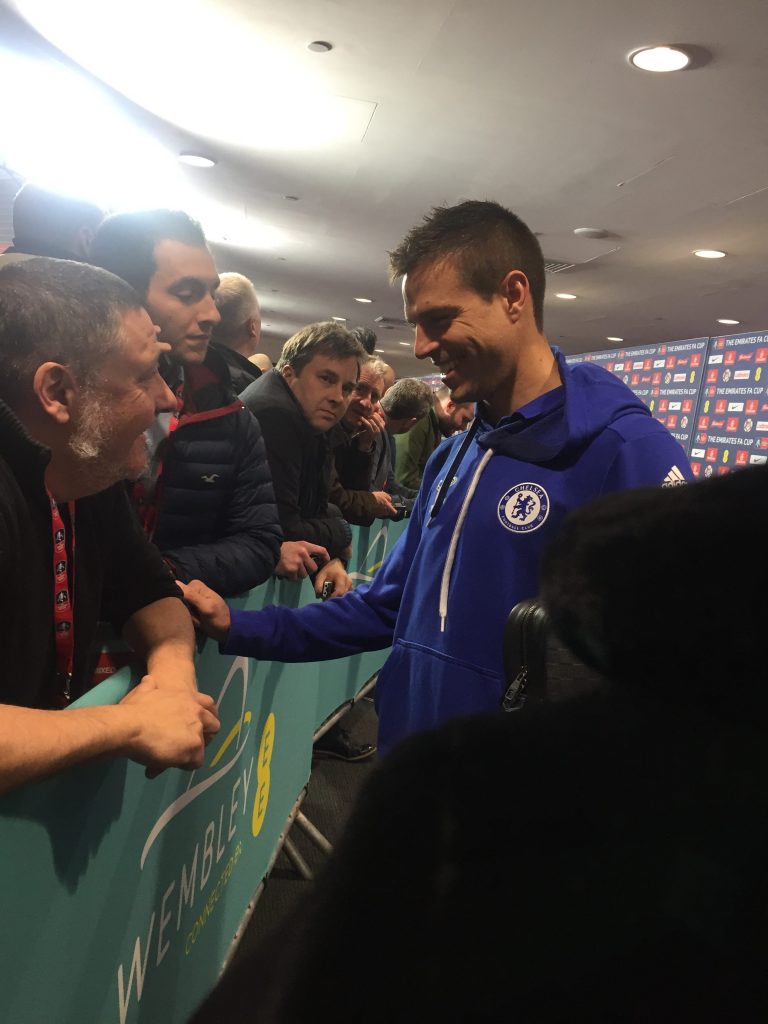 Cesar Azpilicueta is a modest lad and the the fact he was halted from continuing his unbroken run of 74 matches for the Blues by Antonio Conte and not complaining is laudable.
“It’s a good mark” he said.
“But I never thought about it. I just played the games, they come one after the other. At one point, it was normal, but I will try and make it happen again.”
Conte rested Azpilicueta ahead of a series of festive  matches that Starts tonight at Stamford Bridge when the Blues face Atletico Madrid in the final group match of the Champions League.
“I think we are playing a lot of games,” he said. “The manger makes the decision. We have to accept it. The most important thing is the team, and to win. It was important for us, in these two games at home. We have had three games in not even seven days. With a big game against Liverpool after a long trip to Baku so it was a very good week.
“Obviously we have to do our job. We know that Man City are in very good form. They are putting in a very high level. But we have to do our job and to win many points.
The win 3-1 against Newcastle on Saturday would have given the team confidence when they face the Spanish side – Azpilicueta agrees.
“Yes, we have it in our hands to be to be top of the the group,” he said. “We know that Atletico is a very tough team. They come here with the last chance to qualify. So we have the confidence, we have been playing well, winning points and now it’s up to us to get the top spot.
Chelsea’s best performance of the season was the away win in Madrid in the Champions League and the defender is looking forward to repeat performance.
“Yeah, we will have to be at our highest level to win that game because we know how competitive they are even when they were in a less good period. They are a a good team, been in two finals, in a short period of time, they won La Liga too. They will come here to fight to win the game.”
It’s a chance to knock out one of the favourites too
“Yeah,” he did. “Our job is to win and to be top of the group. We have faced a really tough group. We know it’s the last chance for them to qualify. And we have to do our job”
One player Azpilicueta reckons will prove pivotal is Eden Hazard.
“He is very important in every game,” He said. “We know that he can make the difference at any point. He can create a lot of chances.
“When you see him, it looks easy, but when we train with him, we know how difficult it is to stop him. Obviously you can see this in the games, he can make the difference and lead the team.”
Antonio has said that he hasn’t reached his peak yet.
“I agree with that,” he said. “He is still young. I mean he has years in front of him at the big time. I’m sure he works hard to get into that form, to get the best. It’s good to see him making the difference in so many games, he has been doing that for a while.”
Azpilicueta, Hazard and Alvaro Morata have a good on-field relationship.
“Eden and I have been training together for five years, and we have played a lot of times on the left side together, so that is something that comes naturally. And with Alvaro, we have played together in the national team. Even in training and in the games, we try to find each other. For me, the situation is for me to give them the ball and something will happen.
“Hazard and Morata complement each other. They are different and can give different solutions to the team. It’s going well. We are creating lots of chances, it’s important to have two important players in form, and that the team benefits from it.
“The better you know each other and it’s true they are doing a very good job.”
Azpilicueta is not looking too far ahead in the Champions League.
“We have to play a last game before this. And the knockout stage is in February. Obviously we want to have players in the best form to help the team, we will see.”