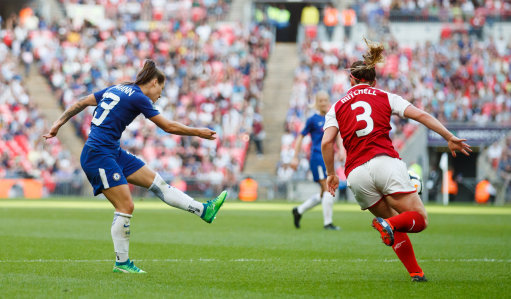 Ramona Bachmann and ‘Mini-Messi’ Fran Kirby brought joy to they Chelsea faithful as they rammed home the goals that won the Women’s FA Cup final 3-1 against a defence-orientated Arsenal at Wembley this afternoon.

While Kirby was the bookies favourite to shine, it was her fellow forward Bachmann who duly took the honours with a double that pierced the heart and defence of the north Londoners.

Kirby smashed home the third that finally knocked the struggling out of Arsenal after Vivianne Miedema brought them back into the game, albeit briefly when 2-0 down.

It was a record attendance for the final – 45,423 that indicates the increasing popularity of the women’s game, but the opening 45 minutes was a dour affair as neither side settled and Arsenal’s defence held firm.

Chelsea’s rearguard were less than settled but the north Londoners had little desire to take advantage of it.

However Chelsea’s Fran Kirby showed her class early on, picking the ball up from her own half after just eight minutes and running directly at the Arsenal  defence. Her clipped byline cross was cleared for a corner.

Ramona Bachmann had a fine chance to open the score two minutes later but her low drive from the edge of the Gooners penalty area went wide of Sari Van Veenendaal’s right post.

Neither defence looked completely happy and Arsenal’s Louise Quinn managed a header from a Jordan Nobbs free kick which inched over Hedvig Lindahl, crossbar on 16 minutes.

Whenever Arsenal get close to the Chelsea area, the nerves kicked in for the defenders Millie Bright.

Vivienne Miedema was unlucky not to score but here effort was deflected away for a corner by Magdalena Eriksson.

Kirby, alla alone upfront, curb through the Arsenal rearguard on 26 minutes, but her left-footed effort went straight to Van Veenendaal.

Ji So-Yun had two chances to break the deadlock on 43 minutes, firstly her free-kick from the edge of the Arsenal area was well held by  Van Veenendaal, then she blazed overb the crossbar a venomous right-footer.

There were no changes at half-time by either side

Within two minutes of the restart, the west Londoners took the lead. Good approach work by Ji and Kirby set up the winger bachmann, who broke into they penalty area, on the right and unleashed an unstoppable right-footer that flashed past Van Veenendaal and in top the roof of her net.

Arsenal responded by forcing Hedvig Lindahl into a low save after a good shot by Beth Mead breached the  porous Chelsea rearguard.

Bachmann smashed home number two, on 60 minutes. Curling in from the right she let fly with a left-footer. It took a slight touch off the back of Quinn and the ball sailed over Van Veenendall and into the net.

Arsenal got back into the game with 17 minutes left on the clock.

Vivianne Miedema had the simplest of chances to tuck the ball home from close range after excellent byline work by Beth Mead.

Within seconds Kirby rammed home number three to restore the two goal lead with a sensational left footer that gave the Arsenal stopper no chance.

Aluko forced Van Veenendaal into a smart save as the Blues ran down the clock effectively and secured a fine revenge for the lost they endured two seasons ago against the same opposition.