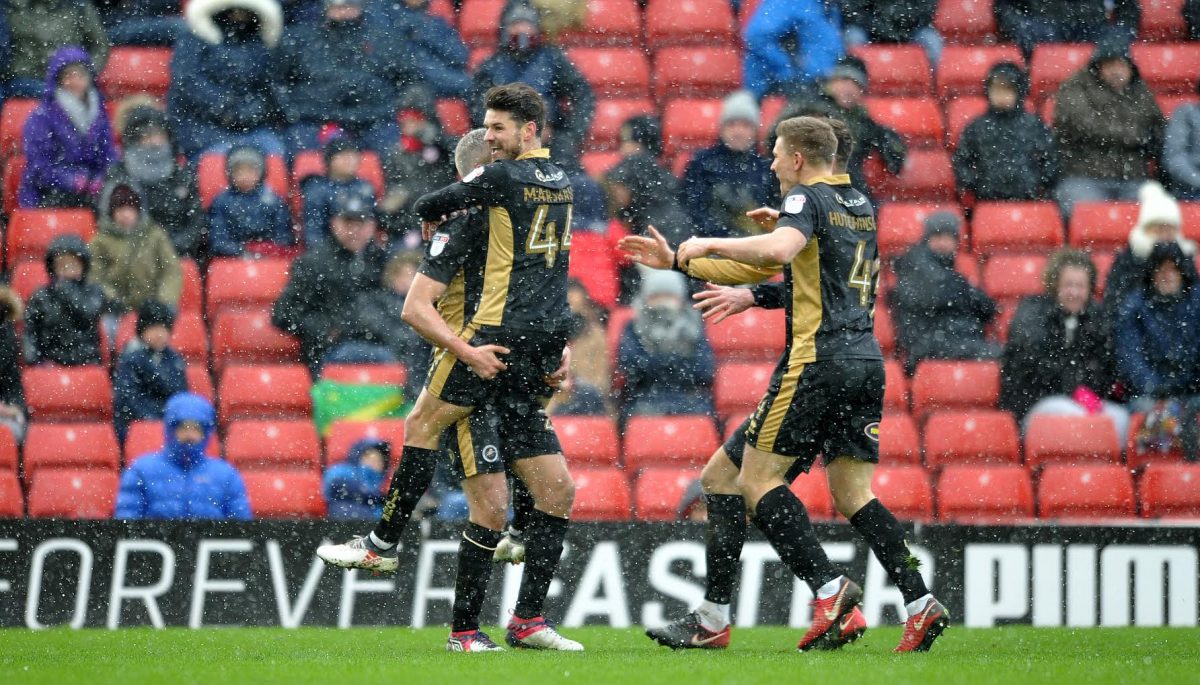 By Jake Sanders at Oakwell

A goal in each half gave Millwall their club-equalling sixth straight away league win as they moved within three points off the Championship play-offs at Oakwell.

Lee Gregory opened the scoring midway through the first-half and then Ben Marshall superbly doubled their lead on 63 minutes with his second goal since joining from Wolves.

The win has extended the Lions unbeaten run to 12 games and are yet to lose in the league since a 2-1 defeat at Norwich City on New Year’s Day.

It was a sloppy opening to the game with Kieffer Moore’s header the only attempt on goal in a quiet first quarter of the game.

Millwall were struggling to get a foothold on the game in the early stages, but suddenly Jed Wallace picked up a loose ball and the Lions sprang into life as the wide man slotted in Gregory, who rolled home past Nick Townsend in the Barnsley net.

Wallace fired a cross that was just too far for Gregory minutes later as the visitors searched for a second and should have got it on 34 minutes. Gregory’s lovely control and pass found Saville, who rounded Townsend, but could only fire over through a crowded Barnsley penalty area.

The visitors continued to threaten and minutes after Liam Lindsay’s header sailed just over for the hosts, Steve Morison had a wonderful chance to extend the Lions lead, but totally missed the ball from close-range after the chance fell his way from some sloppy Tykes defending.

Barnsley came close to levelling minutes into the second-half, but Archer did well to tip Lindsay’s powerful low strike behind for a corner.

Moore was causing Millwall problems and Shaun Hutchinson had to make a crucial block at the near-post and then had an even better chance, but Archer made a fine save from his header.

The home side were really beginning to crank up the pressure but were stunned on 63 minutes when Ben Marshall cut inside before firing into the top corner from 25-yards.

Tykes substitute George Moncur nearly got his side back into the game straight away, but Archer made a stunning stop to deny him.

Gregory nearly made it 3-0, but Townsend blocked his effort after Morison’s fine pass and then Jake Cooper acrobatically cleared Oliver McBurnie’s header off the line to keep Millwall two goals ahead.

Neil Harris brought on fresh legs in the shape of Jason Shackell and Fred Onyedinma and the latter had a golden chance to seal the win, but fired well wide when given the freedom of Oakwell, but it wasn’t to matter as the Lions held on for a memorable victory.