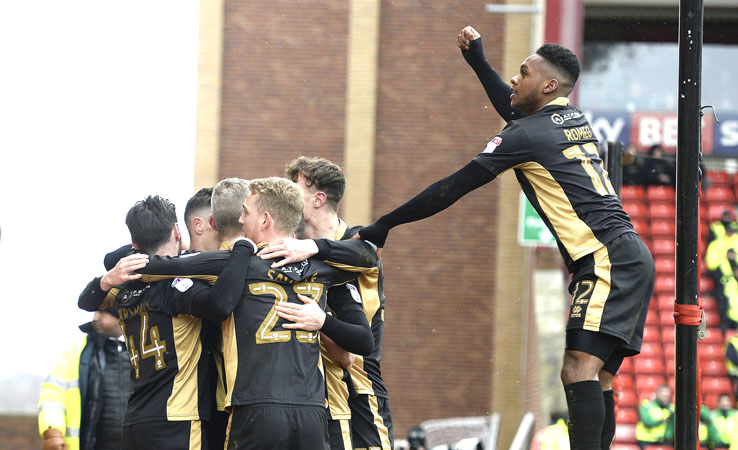 By Jake Sanders at Oakwell

Millwall’s so-called bogey team? Not anymore. Not only did the Lions end a run of five consecutive league and play-off defeats against Barnsley, they matched a 10-year club record of six straight away wins.

They also defeated the Tykes for the second time in 2018, after their 4-1 thrashing in the FA Cup third round at The Den in early January – although both teams rotated their starting line-ups fairly heavily for that tie.

It wasn’t pretty, neither was the football. It was bodies on the line, either side of two moments of quality, that ultimately ensured the points would be heading back to South London as Neil Harris’ side made it 12 Championship games unbeaten. And after Middlesbrough’s draw against Brentford at Griffin Park later in the day, the Lions are just four points adrift of the play-offs going into the international break.

The conditions inevitably made it tough in South Yorkshire as the 13,041 fans inside Oakwell were treated to a number of blizzards. A sloppy start to the contest was music to no-one’s ears. It was a hard watch and an extremely scrappy affair, until Jed Wallace picked out Lee Gregory on 24 minutes, the confident striker did the rest from close-range to bag his eighth league goal of the season and third during this incredible away run.

George Saville, who has shown signs of his early season form in recent weeks, had a golden chance to double Millwall’s lead, but blazed over after great footwork from the ever-impressive Gregory.

The Lions started the second-half sluggishly and Harris admitted that his side were nowhere near up to the standards they have set in 2018. Jordan Archer had to be alert to deny Liam Lindsay and Kieffer Moore in a matter of minutes as the visitors hung onto their lead.

It looked like a goal was coming, but when it did it was totally against the run of play and came via the foot of Ben Marshall, not from the lively George Moncur or Oliver McBurnie – who had looked the likelier to break the deadlock. Wallace broke forward and found Marshall, who spectacularly curled into the top right corner, his second goal since joining from Wolves in January. It was a complete contrast to his scrappy winner at Burton Albion last month.

Millwall were thankful to their back-five after that. They have kept more clean sheets this season (15) than they managed throughout the whole of last season in League One (14).

Archer, who has again been called up to the Scotland squad for their forthcoming friendlies, was in no mood to be beaten and made a stunning stop to deny Moncur from handing the Tykes a lifeline, getting the smallest of touches to keep out the former West Ham man’s low strike.

Jake Cooper’s goal-line clearance on 74 minutes epitomised everything about Millwall this season under Harris. It was the one time Archer was beaten and Cooper acrobatically cleared McBurnie’s goal-bound header off the line as the visitors searched for a route back into the game.

Jason Shackell was introduced just after that chance as the visitors piled pressure on the Millwall goal, and he slotted in perfectly next to Shaun Hutchinson and Cooper, making a couple of crucial blocks.

The win also means that Millwall have now picked up more points on the road than any team in Europe’s top five leagues in 2018 – 18. Only Fulham (43) have collected more Championship points than them since December (39).

Harris’ side have a 13-day rest before they host Nottingham Forest on Good Friday, no fewer than seven players join up with their national sides.

Six more points from the Lions over the Easter period will see them pass the 60-point mark and put themselves within touching distance of the top-six, as well as breaking the club record for successive away wins – if they can defeat Ipswich on Easter Monday.