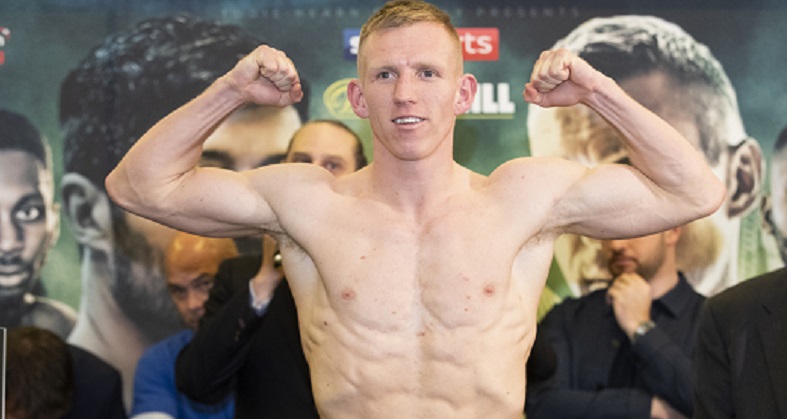 Ted Cheeseman is no longer mapping out his long-term future as he prepares for his ring return on June 21.

The 23-year-old from Bermondsey makes a defence of his British super-welterweight title against Northampton’s Kieron Conway at Bethnal Green’s York Hall.

It is Cheeseman’s first outing since a failed February crack at European champion Sergio Garcia.

The South Londoner claims personal problems – since resolved – meant he was a pale imitation of his normal self as he was left bruised and battered by the sharp-shooting Spaniard. The unanimous points loss saw his record drop to 15-1.

While Cheeseman only has eyes for Conway, his next bout is already lying in wait if he returns to winning ways.

Scott Fitzgerald is due to challenge for the domestic strap but the Preston man – who earned a split decision over Olympian Anthony Fowler – defends his WBA international belt against Brian Rose on July 6.

“It is signed, sealed and delivered as long as we get through our next fights,” said Cheeseman. “But you can’t look past your next fight.

“Before my last one I was talking about Jaime Mungaia [WBO world champion], because I wanted to get to those kind of heights. But now it is as simple as – I’ve got to beat my opponent in front of me. I am very confident I will.

“If I do then there are big things in front of me. The end of August or start of September would be when the Fitzgerald fight takes place.

“He [Conway] is a good fighter. But I have just been in with the number two in the world and, much as I didn’t win, I have got to put pressure on myself. I need to perform. I need to do the business. I have to make sure I try and make everything perfect.
“All this fight is about is getting the win and back on the winning trail. I’m coming back with a clear mind.”
Cheeseman and Fowler had indulged in plenty of sniping on social media as demand for a clash brewed up nicely.

But Scouser Fowler is facing a rebuilding job after his unbeaten record disappeared at the hands of Fitzgerald, who is 13-0 in the paid ranks.
Cheeseman watched their bout, which took place a couple of weeks after he had fought Garcia.

“Both of them performed okay, no-one performed great,” he said. “Fowler flopped more. All the talk was about how good he was – and he flopped. It was a jabbing match for eight rounds. And then eight, nine and 10 it livened up a bit – Fowler came out a bit wild and blew himself out.

“In the 10th round Scott put him on his arse. But for a 10-round fight they were both blowing out their a**** and Scott Fitzgerald couldn’t finish him after he put him down, because he was so knackered.

“I’ll go 12 rounds, that’s what the difference is. I’ll go 12 rounds flat out. If you’re drained and finished in the 10th, then there are two more rounds to go and I’ll be coming to get you out of there.

“It’s inexperience. Fowler was talking as if he was a world champion before he had even won the WBO international – I won that almost two years ago. He is 29 years old – it shows the levels.

“He slagged me off [on social media] after my fight. But I had just fought for the European title and you haven’t even fought for the British yet. You’re boxing for the WBA international which is sort of an English title level.

“You’re both British domestic-level fighters and neither of you are champions.

“At the time I took a lot of stick on social media off other boxing people, but a lot have come tumbling down – it’s good to see karma come back around.

“I’ve never been a fighter to put themselves on a pedestal, but there are a lot of fighters who did.

“All I was doing was pushing towards my goal of becoming world champion. And I know I was pushing fast, maybe a bit too fast, but if you don’t push yourself then you never know where you’ll get to.

“At least when I was talking stuff about other fighters and coaches I had got to a good level.

“As much as I had that blip, I’m not exactly a one-hit wonder. I beat Matty Ryan in my ninth fight, I beat Lloyd Ellett in my seventh – I’ve beaten Paulie Upton, Asinia Byfield and Carson Jones.

“I’ve done it fight after fight. I haven’t really had an easy fight since my sixth one.

“I got really far. I’m still in a lot better place than what I was and I can’t wait to see where my career takes me.

“People say you can’t keep coming forward but that’s my style. I neglected the jab in my last fight. I got hit a lot because where things weren’t working I put my hands down and let him hit me, I was punishing myself.
“My heart was broken because I knew I had f***** up myself.

“I still stuck in there and was still trying to land shots in the 12th round to try and finish him. I hurt him a few times and I wasn’t even fully there.
“If I’d been on it then it would have been a totally different fight – but shoulda, woulda, coulda – it is time to prove it now.

“It’s no good talking it is about proving it. I’m mentally in a better place.
“This is the biggest fight of my career because if I lost then it is done. As much as you can go again and go again, I want to go all the way. If I don’t perform and win this sort of fight then I’m finished.”