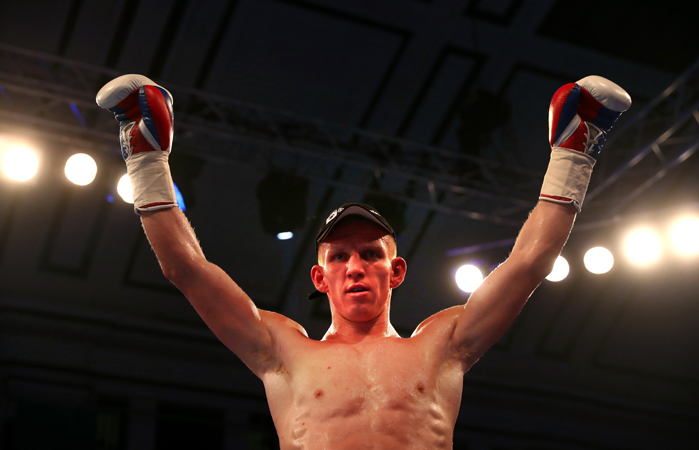 Ted Cheeseman reckons Carson Jones will realise the full size of the challenge facing him when the pair step in the ring tomorrow night.

Bermondsey’s unbeaten super-welterweight is seeking to underline his status as one of the country’s top young boxers by testing his development against the vastly-experienced American at Greenwich’s 02 Arena on Saturday.

Cheeseman was just 20 when he turned his back on a trophy-laden amateur career to sign a promotional deal with Matchroom Boxing promoter Eddie Hearn and has quickly moved to a 13-0 record.

Jones, from Oklahoma, has history of being a party-pooper in the UK. He knocked out Ben Hall at Wembley Arena in November.

Six of his 12 losses in his 57 bouts came by early 2008 and he looked unlucky to drop a majority decision verdict to Kell Brook in 2012. The Sheffield stylist rematched the following year and inflicted a rare inside-the-distance defeat for the Oklahoman.

But Cheeseman, 22, plans to be a stone heavier by the time they get in the ring – admitting he could easily make the 12-stone super-middleweight limit.

Jones has said he will be unhappy if he doesn’t KO the South Londoner.

“He’s going to be gutted then,” said Cheeseman. “He has really underestimated me. I looked at something on social media where someone had asked who is going to win and he’d replied ’22 years old and had 12 fights – enough said’.

“Comments like that make me laugh. You can’t wait to shut someone like that up. We’ll see what he has to say afterwards

“I’ll definitely get him out of there. It will be a stoppage – that could be really early or really late.”

Cheeseman has to graft to get down to the 10st 7lbs limit.

“It is always quite tough right near the end to make the weight,” said Cheeseman. “I always eat healthily and I’m used to good amounts, so it’s harder when you cut the amounts and are trying to recover from sessions.

“But then you’ve got 24 hours to get it all back in you. He is more of a pumped-up welterweight, he doesn’t want to kill himself making the weight.

“I could probably go as high as 12 stone and still be ripped, I wouldn’t be fleshy at that. Anything above that I’d start losing my shape, unless I added more muscle.

“I don’t want to talk too much. He talks quite a lot. Everyone changes afterwards – it is fight-talk before. Hopefully I make myself a star and he can tell everyone how he thinks I will be a good fighter..”

Cheeseman has boxed 53 rounds with Jones on 302.

“He has had a lot of hard fights and that is going to get to you sooner or later,” said Cheeseman. “We’ll see on Saturday if he is still the same Carson Jones or I’m miles above him.”

Cheeseman has been limited to the amount of tickets he can sell as the “British Beef” show – headlined by Brixton’s Isaac Chamberlain taking on Olympian Lawrence Okolie in a cruiserweight grudge clash – is sold out.

“It is rammed to capacity,” said Cheeseman. “Originally I ordered 250 tickets but I couldn’t get that much.

“The whole training camp I’ve had people texting me asking for tickets and I’ve had to send them to other people or internet sites that sell them. I could easily have sold 400-500 tickets.”