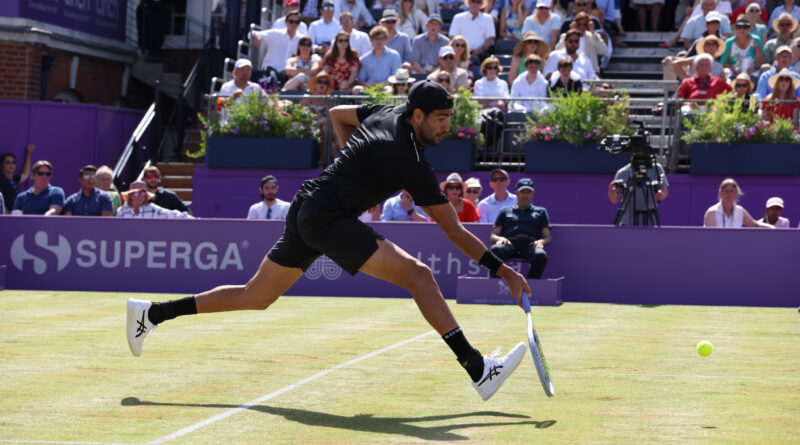 Matteo Berrettini marched imperiously to an eighth win out of eight matches at Queen’s as he homes in on successive Cinch Championship titles.

The Italian has never lost on the Barons Court lawns and he shrugged off an early break of serve in Friday’s quarter-final against USA opponent Tommy Paul before breezing to a 6-4, 6-2 victory in under an hour and a quarter.

Clad in all black in the baking hot west London sunshine, the thought occurs that he will surely be formidable clad in all white when Wimbledon comes along the week after next.

He gave Novak Djokovic a run for his money in last year’s final at SW19 and few would rule out another serious assault on the summit there and another shot at a first grand slam title.

Not that he sees himself as one of the best bets, with Djokovic and Rafa Nadal knocking around. “I wouldn’t consider myself the favourite,” he said of Wimbledon, but I like to think that I can win it.  That’s the goal.

In terms of tomorrow’s final at Queen’s, he could face a big test, however, in the shape of two times winner Marin Cilic, who will be the favourite to make the final in his half of the draw after easing through to his sixth semi-final in the tournament.

The wily Croat was in clinical form against Finnish qualifier Emil Ruusuvouri, reaching the last four with a 7-6, 6-4 triumph. It was his 80th career win on the surface and only four active players have achieved more.

Now 33, he is one of the real top exponents on grass and has the gift of elevating his game on key points. After a first set which followed serve before a tie-break, Cilic suddenly raced away with it, taking the shoot-out 7-2.

Momentum gained, he then broke serve twice to ease home, even if he did eventually drop serve late on. He looked sharp and his faith in the depth and angles of his drives led him to successfully challenge marginal line calls on at least four occasions.

His opponent in today’s semi-final will be Balkan adversary Filip Krajinovic, who finally ended the hopes of last remaining home player Ryan Peniston.

Hoping to match compatriot Cameron Norrie’s run to last year’s final, the man from Southend has had a superb tournament, beating French Open finalist Casper Ruud of Norway and Argentina’s Francisco Cerundolo on his way to the quarters.

Peniston won the opening set 6-4, but succumbed 6-3, 6-3 in the next two in the longest contest of the round at a shade over two and a quarter hours.

He hit some glorious winners with his double-handed backhands and served very well at times before being eventually unravelled by the more experienced Serb.

“I think have been playing pretty well over the last few weeks, and especially this week as well,” Peniston said. “I just think I have got to keep working hard and training and keep sticking to the things that I have been doing.  Keep trying to learn and just keep fighting every point.”

Standing in Berrettini’s way will be Dutchman Botic Van de Zandschulp, who overcame Spaniard Alejandro Davidovich Fokina 6-2, 6-4 in the first match of the day.