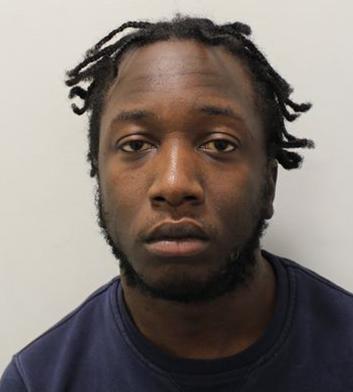 A 21-year-old, who jumped off a moped and repeatedly stabbed a man on the ground with a large knife, has been jailed for 16 years for attempted murder.

At around 5:55pm, the 15-year-old boy driving the moped pursued the victim, who was walking alone along Longheath Gardens and drove into him causing him to fall to the ground.

While still on the ground, Kouebitra jumped off the moped, pulled out a large knife and stabbed the victim several times.

The attack was disrupted when a passer-by witnessed the ordeal and intervened by shouting at Kouebitra to stop.

At this point, after noticing there were witnesses, Kouebitra returned to the moped and was driven away by the 15-year-old boy.

The victim was taken to a South London hospital with non life-threatening injuries and has since been discharged.

Kouebitra was identified by officers and arrested on Wednesday, 11 October on suspicion of attempted murder.

He was charged the following day with attempted murder and possession of a pointed or bladed article in a public place.

The 15-year-old boy was arrested at an address in Selhurst Place, South Norwood, on Wednesday, October 11, 2017 on suspicion of attempted murder and was chared the following day.

He made a plea for grievous bodily harm at Central Criminal Court on March 5, 2018 which was accepted by the Judge.

Kouebitra was sentenced with an extended license of 20 years on Friday June 1 following a two week trial at the Old Bailey.

He previously pleaded not guilty at a hearing at the same court on January, 10, 2018.

DC Jason Sim, who led the investigation, said: “This was a brutal attack which caused the victim to suffer terrible injuries.

“Kouebitra posed a significant threat to the public by arming himself with a knife.

“We believe if it wasn’t for the brave member of public who intervened, Kouebitra would have continued his attack and killed this young man.

“Thankfully the victim has made a full recovery and I hope the sentencing acts as a significant deterrent to those involved in knife crime.”