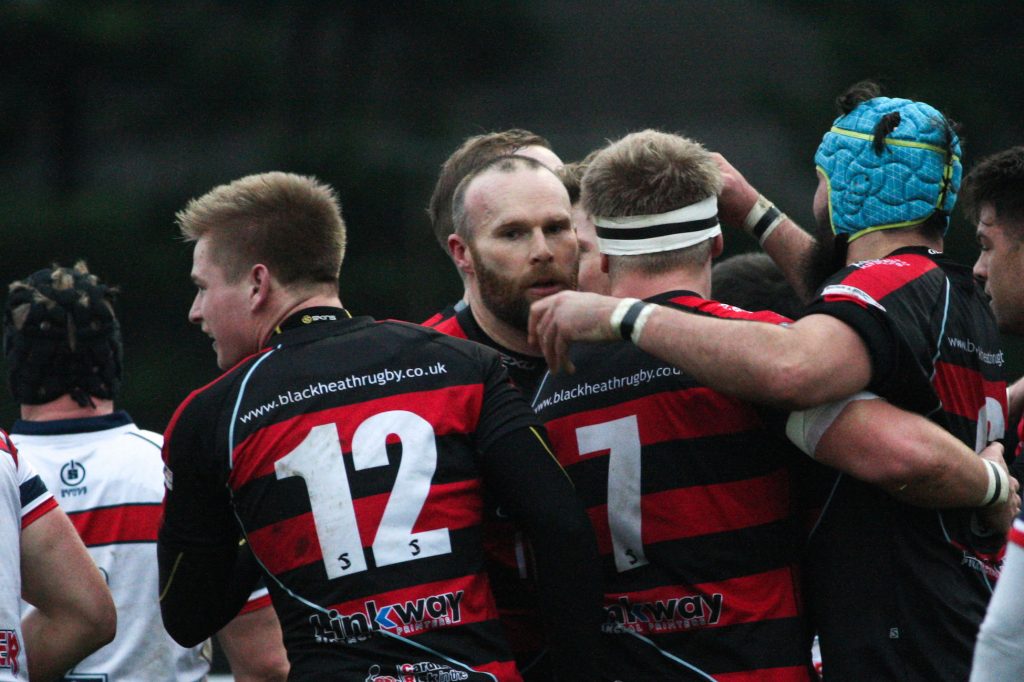 It’s sometimes said that draws in rugby are unsatisfactory results, but this one didn’t lack for excitement and passion – which occasionally bubbled over the edge – and in the end provided for a fair reflection of the game, writes Graham Cox.

The contest finished with Blackheath, who had had to fight back hard after conceding a penalty try when Geoff Griffiths was adjudged to have deliberately knocked-on as Park had an overlap begging, breaking up field from their own goal-line, before play was brought to a final halt midway in opposition territory.

The try, in the 58th minute, put Park ahead for the first time in the match and came after Blackheath had tested the Surrey side’s defence with two drives for the goal-line at the other end of the field but, orchestrated by the fine half-back pairing of Will Crow and Harry Leonard, the visitors’ ability to break quickly caught the hosts in disarray, Griffiths’ illegal intervention the only barrier to a certain score.

Nevertheless, Blackheath held an edge at the set-piece (notably at the line-out where Mike Perks and Matt Miles hit their targets without fault) which returned them to the attack, and although the Park defence was again solid for a while, when their scrum buckled under pressure from the Club’s tight-five for a third time, the penalty try on 71 minutes brought parity once more.

Park came closest to breaking the deadlock in the closing stages as another attack sped down the left flank but, making amends, Griffiths’ last-ditch tackle interceded before Blackheath moved away from danger in the final play.

Blackheath though are the more likely to look back at an opportunity missed.

Leo Fielding struck an 11th-minute penalty to open the scoring, and as Park second-row Paul Spivey became the first of five yellow cards (the odd one against the visitors) a delightful pop pass from Mark Cooke sent Anders Nilsson and Harry Bate through the midfield, the two back-rows showing wonderful handling before Fielding finished off the move and added the conversion for a 10-0 lead.

For a moment Park’s discipline faltered with skipper and number-eight Hugo Ellis looking liable to combust, and with James Shanahan making his Club playing debut at fly-half, Blackheath looked likely to score again.

However, an intercept demonstrated Park’s ability to counter, and although Fielding got back to make the crucial tackle, the left-wing failed to move away, incurring ten minutes on the side lines, and with the hosts’ defence depleted, Park moved ball across field for opposite number Ollie Hassell to cross out wide, leaving the score at 10-7 at the break.

National League One takes a break over the festive season.  Blackheath return to action in the New Year when they travel to Ampthill on Saturday 6th January with kick-off at Dillingham Park set at 2.15 pm.