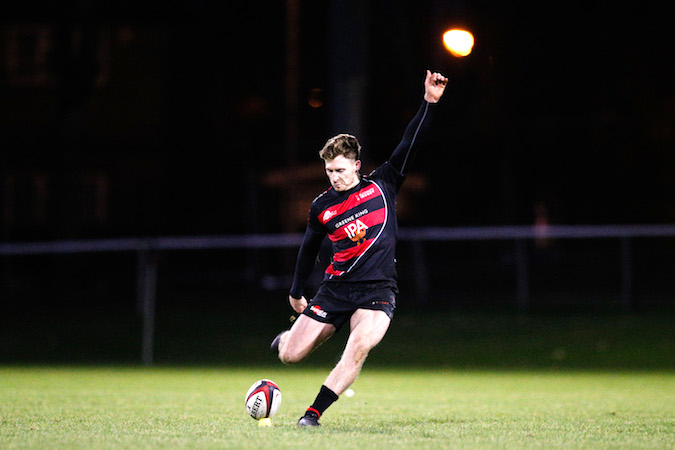 Two tries, a long-range penalty, and a fine kick to touch – all from Leo Fielding – set up a 20-12 victory for Blackheath over Birmingham Moseley.

A gusty cross-field wind played havoc at times with both sides’ kicking.

Not so for the Blackheath wing, who drilled a 45-metre penalty through the uprights, with room to spare, in the fourth minute to open the scoring.  That was followed, seven minutes later, with the kick to touch that saw the Club pack gather to drive Harry Bate across for the first try, giving the hosts a lead in excess of a converted score – a cushion they would maintain for the remainder of the contest.

CJ Osazuwa took clean line-out ball for Blackheath on 46 minutes, and as the pack once again drove forward, Joe Tarrant’s lofted pass found Fielding in enough space to walk across the goal-line for the first of his tries.

A mistake from Blackheath at the line-out on the hour got Moseley on the scoreboard, tight-head Jay Tyack collecting the loose ball before scrum-half Sam Brown sent left-wing Mark Harrison squeezing across by the corner flag.

Although Tarrant’s punt over the defensive line only had Danny Herriott in pursuit, it was enough to force the West Midlanders to carry the ball across their own line to concede a five-metre put-in.  Burcham’s lobbed pass found Fielding out wide, the wing sliding over for his second score.

Tarrant added the conversion to put the result beyond doubt.

“It meant they had to play a bit more rugby than they intended, on which we capitalised and came away with a comfortable win.”

Blackheath travel to Hertfordshire on Saturday to take on Old Albanian (3pm).