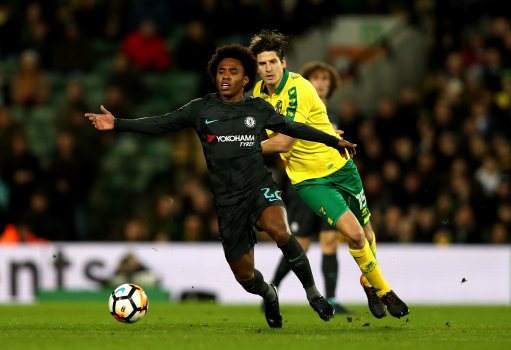 What a tepid, awful, display by the Premier League champions against Championship opposition Norwich City this evening at Carrow Road as the 0-0 draw in the FA Cup 3rd round means a replay at the Bridge.
Antonio Conte made nine changes from the side that drew 2-2 with Arsenal in midweek and none earned the right to face the same opposition in the Carabao Cup semi-final on Wednesday.
The return from injury of David Luiz was perhaps the only bright spot in an match devoid of quality and perspiration.
Kenedy had the first effort on goal after three minutes, but his left footer was well wide of Angus Gunn’s goal.
His next action saw him collide heads with Ivan Pinto, leaving the full back flat on the ground. After a few minutes of attention from the medics, he was up and back in the action.
Norwich’s first effort, 17 minutes, was a speculative Josh Murphy shot which went towards the Chelsea’s near post, but Willy Caballero was quick to spot the attempted cross change path and snaffled the ball to safety.
A deflected Kenedy shot, on 31 minutes yielded a corner rather than a goal, – typical of Chelsea’s anaemic display.
There were no changes by either side at half-time.
The Blues put in more effort attacking-wise in the opening minute of the restart than they didn’t the previous 45. Willian, was the architect of two very quick attacks – both missed.
He had another chance on 56 minutes, this time, goal-bound – but Gunn was equal and tipped the low drive around his near post for a corner.
And again two minutes late, this time the shot was more central. Again Gunn saved.
A looping, deflected right-footer by Alex Pritchard, on 62 minutes, almost fooled Willy Caballero. But luckily for the ex-Man City stopper the ball inched over his crossbar.
Pedro was next up to test Gunn, and his long-range curlier went straight into the midriff of the goalkeeper.
The home side weathered the storm and started to make in-roads in the Chelsea defence.
Caballero made a hash of a punch out, from a corner, on 67 minutes, dropping the ball into the gleeful path of Murphy. The winger’s left footed-volley was just wide of the Chelsea goal.
Conte had seen enough of his striker Michy Batshuayi and opted to bring on Alvaro Morata with 15 minutes left.
He was quickly followed by Charley Musonda for the ineffectual Kenedy.
A late, late volley by Davide Zappacosta, that went inches wide summed up the lacklustre display by the boys from Stamford Bridge.