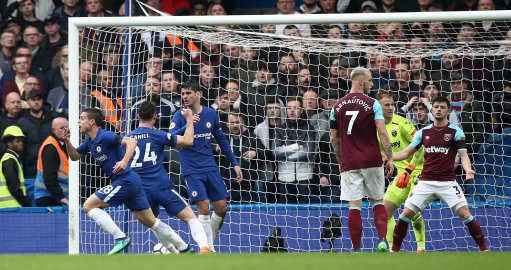 A goal-shy Chelsea drew 1-1 against West Ham United at Stamford Bridge this afternoon as neither the home side nor their East End visitors deserved anything more.

Chelsea had 21 chances to West Ham’s four but in truth this was a poor advertisement for top flight football.

Cesar Azpilicueta’s third goal of the season seemed to have spurred underperforming Chelsea into life, but once again they failed to capitalise on a lead and allowed West Ham to get back into the game.

In terms of importance West Ham got the better of it as their point puts them six points clear of the drop zone, Chelsea remain fifth in the Premier League.

For Chelsea they have only won five times in the last 20 games and are stagnant.

The backdrop to the game was all about the untimely death in midweek of Ray Wilkins.

A near full house of 41,324 all rose to give  Wilkins a tremendous applause prior to kick off.

The Chelsea players all wore black warm-up shirts with Wilkins’s number 8 on their backs.

The home side’s dug out left vacant the assistant manager’s chair – a nod to his time as assistant manager of the the club. A giant club-bought flag inched across the Matthew Harding stand, all players wore black armbands.

Eden Hazard had a fine run and shot  on four minutes but his edge of the penalty area  shot inched wide of Joe Hart’s right post.

West Ham’s sporadic attacks were however Moore dangerous, and restored to the side skipper Gary Cahill had to be at his very best to thwart Marko Anoutovic, on 15 minutes.

Edmilson Fernandes, made a horrible error on 17 minutes, giving the ball away to Willian, but the  Brazilian wide man failed to profit from the lapse in concentration from the visiting midfielder.

Another effort by Willian took a deflection for a corner when the goal-bound curler looked destined to end up in the back of Hart’s net.

Alvaro Morata had the ball in the back of the West Ham net on 24 minutes – a lovely tuck home from close range after good set up play by Eden Hazard, but he was just offside.

A Hazard-inspired move should have seen Chelsea take the lad on 28 minutes bu Morata tried an audacious back flick they typically missed.

Team minutes from the break and hart produced a magnificent save from Willian. But the subsequent corner saw the home side take the lead through the endeavour of Azpilicueta who tickled the ball over the line from close range.

But the restart saw the traffic in the same direction – towards the West Ham goal, and Willian, should have doubled the lead, but he slide the ball just wide of Hart’s goal.

Morata thought he had notched up the second, but after latching onto a misplaced ball by West Ham, Morata raced goal wards, passed two his left to in-running Willian. he cross the ball along the six-yard box and Morata skilfully ticked home. But he was adjudged to have strayed offside – again.

Chicharito came off the bench on 69 minutes and with three had equalised with a smartly taken low drive which cruised past Thibaut Courtois. The ball from Anoutovic on the byline was a result of a portly execute clearance header by Cahill which fell invitingly to the striker.

Antonio Conte decided to freshen up hips ranks and Pedro and Oliver Giroud replaced Victor Moses and Morata with 123 minutes left on the clock.

Hart produced a magnificent save from a Marcos Alonso blaster which must have impressed watching England assistant manager Steve Holland.

A great last-ditch tackle from N’Golo Kante halted Anoutovic in his tracks as he raced down on goal as the visitors went for the jugular.

Another Hart save prevented Giroud’s powerful downwards header from producing a winner on 86 minutes.

Next up for the Blues is an away trip to relegation-haunted Southampton on Saturday.