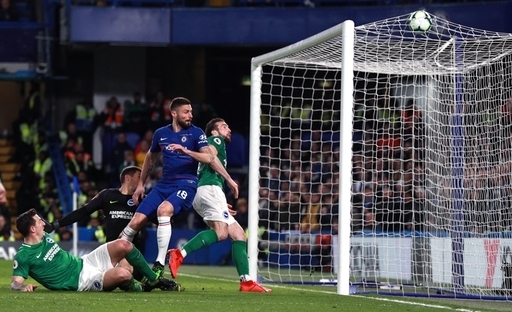 Chelsea cruised past Brighton tonight, at Stamford Bridge, as Olivier Giroud, Eden Hazard and Ruben Loftus-Cheek dismantled the South Coast outfit 3-0 and leapfrogged Manchester United by one place to fifth in the Premier league.

A much-changed side from the lucky 2-1 win at Cardiff at the weekend, greeted the frustrated Chelsea supporters as head coach Maurizio Sarri opted – finally – to give a league start to Callum-Hudson-Odoi and a third league start to Loftus-Cheek.

Five others kicked off against the Seagulls – all with points to prove and all played well.

In truth, Brighton hovering about the relegation zone, looked as if they had Saturday’s FA Cup semi-final against Manchester City on their minds, as they did very little to trouble a Blues side bereft of confidence after an indifferent set of results.

The changes made for a positive atmosphere from the fans, who, had they witnessed another anaemic, display would have vented their anger, in the same way they did in the Welsh capital.

As it was the mood on the pitch was positive.

A shot over the bar on 10 minutes, signalling his intent to prove that he is ready and willing to take a more active part in the season.

The Seagulls, like most sides that visit the Bridge, were more than happy to sit back, absorb the pressure and try and break quickly.

Eden Hazard had a glorious chance on 36 minutes, latching onto a Shane Duffy header to volley height over Mat Ryan’s crossbar.

But the pressure finally told and two minutes later, Olivier Giroud was on hand, from close range to tuck the ball home. But all the main work fell to Hudson-Odoi on the right. He beat substitute Anthony Knockaert and sent in a low drive which the France striker made no mistake with.

Hudson-Odoi was unlucky not to score on 56 minutes when an angled cross by Hazard saw the winger on the far post. His downward header was well saved by Ryan.

The mercurial Hazard thumped home a beauty on 60 minutes to kill off the Brighton resistance. He worked a one-two with Giroud, sent Duffy onto the floor with a smart cutback and the curled a right-footed beauty past a luckless Ryan.

Anything Hazard can do, Loftus-Cheek can do better. And a sensational, curler four minutes later proved just that as the Seagulls were sliced apart and 3-0 down.

N’Golo Kante missed a close-range sitter after another excellent pass by Hazard as the Blues went on a rampage.

But as if to cull any enthusiasm, Sarri decided to bring on right back Davide Zappacosta with 16 minutes left, skipper Cesar Azpilicueta headed towards the bench. Loftus-Cheek soon followed as did Hazard – Mateo Kovacic and Willian entered the fray.

The Blues have a derby on Monday night, back at the Bridge against West Ham United.