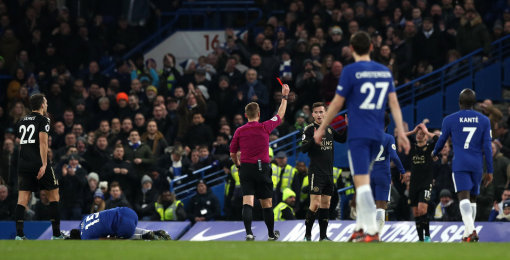 Woeful, goal-shy Chelsea failed to tame 10-men Leicester in another dour offering at Stamford Bridge this afternoon, eking out the third 0-0 score in as many matches.
Foxes left back Ben Chigwell was handed two yellow cards within five second-half minutes, but by then the Blues were in a rut.
Boos greeted Antonio Conte’s men at the end of the game – the fans are not happy.
So many Chelsea players were out of sorts – missed passes, lack of set-up play and no efforts on goal worthy of the name.
Chelsea attempted to start the game on the front foot, but that quickly evaporated and a creeping sense of a team stuck in neutral was fed to the 41,552 fans in the stadium.
An early Victor Moses long-range effort on two minutes, goal-bound, but blocked by a sea of Foxes, suggested better things. But that was as good as it got for the opening 45 minutes.
The visitors had a great chance on eight minutes, Shinji Okazaki, clipped the ball over Thibaut Courtois’s crossbar. This was followed by Jamie Vardy tucking a smart right-footer inches wide after Antonio Rudiger allowed the striker to stay onside.
He opened up the Chelsea rearguard seconds later. But this time, his angle shot, cut across Courtois and went wide of the goal.quite how Leicester dod not score is unknown, first of all, a header from an unchallenged Wilfred Ndidi was brilliantly well saved by Courtois.
The Blues went up the other end and Cesc Fabregas forced Kasper Schmeichel into a good save.
Skipper Gary Cahill came off injured on 32 minutes to be replaced by Andreas Christensen.
But that did noting to stop the porous Chelsea defence as Leicester, if they had the cutting edge, would be several goals to the good by now.
Fabregas did force Schmeichel into a fine save four minutes from the whistle.
There were no changes by either side at half-time.
A deflected Riyad Mahrez shot almost crept past a beaten Courtois on 58 mi notes, but the ball drifted out for a corner.
But it was another terrible half by the Blues – to the point that Conte made a double substitution – Willian and Pedro for Fabregas and ineffectual Eden Hazard.
Two yellow cards for Ben Chigwell within five minutes left the visitors playing out the remaining 21 minutes with 10 men.
A shot by N’Golo Kante warmed the palms of Schmeichel as the Blues sought to take the numerical advantage.
Tiemoure Bakayoko hacks the ball over Schmeichel’s crossbar on 78 minutes after, for once, good set-up play be the Blues.
But it was not to be.
Next up for Chelsea is a FA Cup replay against Norwich City on Wednesday night.