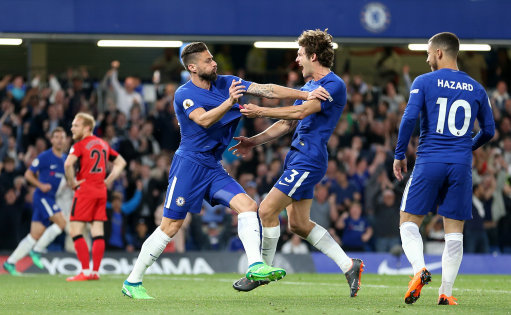 Brilliant Huddersfield denied Chelsea the three points needed to take the serious possibility of a fourth place finish to the last day, and also nabbed the point in a 1-1 draw to secure their own survival in the Premier league.

The Blues were poor and if this was Antonio Conte’s last home game in charge of the former champions, then it will be one that has typified their season.

An inability to kill off teams at Stamford Bridge has been poison to the team. And there was no antidote by players or management.

Chants of “We are staying up,” echoed from the away section , while the home fans were dumbstruck by what they saw.

The Blues laid siege to the visitors goal as soon as Marcos Alonso’s fortunate equaliser that cancelled out Laurent Depoitre’s sensational opener.

To add insult to injury, thousand of Chelsea fans decided after the whistle not to celebrate with the players for a lap of honour – I’m sure many of the players felt the same.

Five minutes in. And a brilliant pass by Cesc Fabregas found Marcos Alonso, on the left. he took one touch before letting fly with a venomous left-footer which goalkeeper Jonas Lossl did well to block at his near post.

On 13 minutes, quite how Antonio Rudiger failed to knock the ball home, when clear at the far post is a mystery. A Fabregas corner was nodded on by Andreas Christensen and all the German centre-back had to do was tap it in, but he sliced the ball wide instead.

A fine volley by Alvaro Morata from a Fabregas pass, on 31 minutes was on target, but again, Lossl was on hand to snuffle the low shot.

Five minutes before the break, Morata broke free, rounded Lossl, but took the ball too wide and his angled cutback zipped along the goalie and was cleared.

With their first attack of the game, on 50 minutes, Willian was disposed  in midfield, the ball was fed to Laurent Depoitre who outpaced the static defence, and when Willy Cabaello raced out he was duly and fairly bundled over by Depoitre, who simply chipped the ball over Rudiger who slipped to give the visitors a sensational lead.

The equaliser came on 62 minutes and it had an incredible slice of luck, that has eluded the Blues for much of the season.

Cesar Azpilicueta sent in a low, right byline cross. The ball was carelessly cleared by Terrance Kangolo straight onto the head of Alonso, and the ball ricocheted off his forehead, past Lossl and in too the back of the net.

With Chelsea laying siege on the Huddersfield goal, Lossl came up with a spectacular save to tip Christensen’s close-range header onto the post and it was cleared. That came after a pinball session where the Terriers defence defended like Terriers.

A Giroud bicycle kick inched wide as the fourth official put up the board for six minutes added time.

That was the best effort in added time. The Blues ran out of steam and Huddersfield survive.