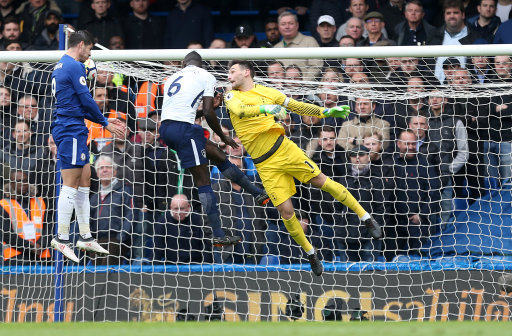 Chelsea crumbled at Stamford Bridge this afternoon, losing a must-win Premier League match 3-1 and thus almost certainly consign the Premier League champions to also-rans status of Europe and participants in the Europa League next season and that despite taking the lead.
Chelsea needed to win to get onto the coattails of fourth-placed Spurs – and a chance of Champions League football – they failed dismally.
Those Chelsea under the age of 28 will be in a state of bewilderment today as that was the last time Spurs won at Stamford Bridge.
A late Gary Lineker goal gave the north Londoners a 2-1 victory.
Since then, west London had been Blue.
But make no mistake Chelsea deserved nothing and got nothing.
Spurs by contrast, were assures, powerful and looked like they knew what they were doing.
The gulf in class between the two sides evident through the game.

The opening stages saw a feisty and high-tempo game, which even saw normally placid Eden Hazard put in a tough-tackle, such was he caught up in the emotion of the match.
Spurs looked more dangerous, and on 10 minutes a deep right wing cross found Dele Alli on the six-yard box. Thankfully for the Blues, his header went wide of Willy Caballero’s left post.
Chelsea almost scored on 18 minutes – an excellent run by Hazard created confusion and Willian’s left-footed drive forced Hugo Loris into a smart save to his left.
a minute later and Marcos Alonso slotted home a cool left-footer from the 10 yards out, but he was adjudged to have been offside and the fine effort was ruled out.
A Victor Moses shot, on 29 minutes, took a slight deflection, but insufficient to warrant Lloris having to make anything other than a regulation save to his left.
A minute late and the Blues went ahead.
A fine cross-field ball by Rudiger found Moses on the left. A first-time cross was perfect for Alvaro Morata, who took advantage of Lloris missing the ball and the Spain striker headed into an empty net.
A venomous 25-yarder by Christian Eriksen six minutes from the break stung Caballero’s finger-tips, but he managed to snaffle the ball at the second attempt.
A daisy-cutter by Alonso saw Lloris redeem himself as the goal-bound effort was partied away. Morata wasn’t sharp enough to take advantage of the loose ball and it was swiftly cleared away from danger.
As soon as Moses failed to clear the ball, on the right, the danger signs were evident and when the ball fell to Eriksen and the Dan struck a sensational 25-yarder that dipped so late to give Caballero no chance.
Alonso had a chance late on but again Lloris was equal to the task.
There were no changes by either side at half-time.
A stunning save by Caballero, on 62 minutes, who dived full-bodied to his left to thwart a Son Heinz-Min, left-footed curler from the edge of the Chelsea penalty showed that Spurs had started the second half in the ascendency.
And on 62 minutes the visitors took the lead. A long ball to Alli saw the England man get free of his marker, trap the ball and then poke it clear of Cabellero.
It was a body-blow to the home side but they hadn’t done anything in the half to suggest they could win the game.
A Willian blaster two minutes later was wide, but at least showed some intent.
But totl chaos in the Chelsea rearguard on 66 minutes when multiple failures to clear the ball, saw Alli poke home to increase the away side’s lead.
Antonio Conte brought on French striker Olivier Giroud with 10 minutes left – off came Moses.
He was quickly followed by Emerson for Alonso. And then Callum Hudson-Odoi for Morata.
They need not have bothered – the game was lost long before then.