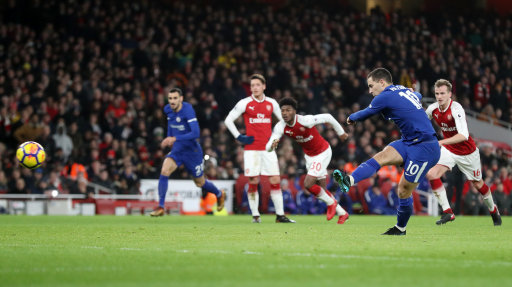 Hector Bellerin scored a late, late equaliser to rescue a point for the north Londoners as the champions thought they had snatched all three points in a pulsating 2-2 draw at the Emirates Stadium tonight.
The Blues were not at their imperious best, but just good enough at the business end of the pitch to snatch a point after going behind after Jack Wilshere smashed home the opener.
Eden Hazard responded with a jinking run in the Arsenal penalty area and he was hauled down by Bellerin. He took the spot kick himself, sending Petr Cech h the wrong way.
Then it was wing back Alonso to prove he could do what Alvaro Morata failed to do, score.
With the final whistle close, Bellerin grabbed a goal that earn3dearned the Gooners a point.
Substitute Davide Zappacosta crashed the Arsenal crossbar as the Blues went for the winner, but a point it was for both sides.
The early exchanges were typical of this Derby, neither side prepared to take a risk and both content to retain possession – to the point of attempting to bore the opposition into making a mistake.
A deflected free-kick by Alexis Sanchez on five minutes, that went for a corner, the first chance for the home side.
Chelsea, by contrast were prepared to be a be a bit more adventurous , especially on the counter-attack, which yielded several corners.
Morata missed a golden chance on 14 minutes screwing the ball wide of Peter Cech, when on a one-on-one. Morata did everything up to that point, outpacing Calum Chambers on a break from the half-way line, then when faced with Cech, bottled it.
Arsenal had a penalty claim turned down a minute later, then a magnificent save by Thibaut Courtois from a Alexis shot, saw the goalkeeper tip the ball onto his right post, it then bounced across the goal line and off the other post, back into the grateful palms of the Belgium stopper.
Courtois was in action again, foiling Alexander Lacazette, as the striker’s shot, was goal-bound, before Courtois dived low to his left to tip the ball round the post.
Cech was forced into fine save 16 minutes before the break, when he tipped over his crossbar a viscous left-footer by Tiemoure Bakayoko from the edge of the Arsenal penalty area.
Cesc Fabregas sliced the ball over the Arsenal crossbar deep into added time after excellent set-up.play by Eden Hazard.
There were no changes by either manager at half-time.
Cech was forced into making two great saves early in the second half, he tipped away a Hazard low drive and then followed that up by a finger-tip save from an an Alonso header.
Antonio Conte had seen enough of his side getting cut though and opted to bring on Davide Zappacosta for ineffectual Victor Moses on 54 minutes.
But it had little effect and inevitably the pressure put on by the home side told, and Jack Wilshere smashed home from just inside the Chelsea penalty area, clipping the inside of Courtois’s left post and crashing into the back of the net.
Incredibly Chelsea got a penalty on 67 minutes after a jinking run by Hazard saw Hector Bellerin clip the mercurial midfielder.
He got up took the spot kick and smashed the ball home, sending Cech the wrong way in the process.
Morata then did it again, miss. He outmuscled Rob Holding but then, when free, sent the ball hight over Cech’s crossbar.
Conte brought on Danny Drinkwater to shore up the midfield, taking off Fabregas with 20 minutes left.
Conte’s last throw of the dice by bringing on Willian for Hazard on 84 minutes.
Within sixty seconds, the Blues stole the lead – Zappacosta cut Ainsley Mitland-Niles to pieces on the right and sent in a low byline drive which Alonso was first to react and he flashed home the ball pst Cech.
Deep into added time, the Blues, needlessly sitting back allowed Bellerin to smash home a 20- yarder.
The drama wasn’t over then as Morata missed his hat-trick of chances, before he watched Zappacosta rattle to Arsenal crossbar