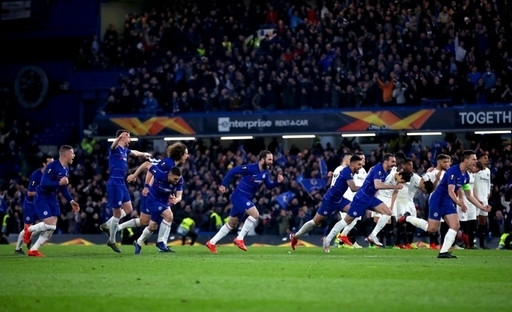 BY PAUL LAGAN
at STAMFORD BRIDGE

Drama, but not quality of the highest order was served up at Stamford Bridge tonight as Eden Hazard propelled Chelsea into the final of the Europa League with a spot kick that gave the Blues a 4-3 penalty shootout victory over German outfit Eintracht Frankfurt after a 1-1 draw after 90 minutes and 30 minutes of dismal extra time.

Following their 1-1 draw last week, it appeared the easiest of tasks for Chelsea to finish the second leg off at home – but the west Londoners, not for the first time this season fell apart in the second half and where lucky to survive.

If that spot kick was the last goal for Chelsea the Belgium scored at the Bridge, a move to Real Madrid is looking more likely by the day, then it will be the perfect send-off for the mercurial midfielder who has graced the pitch for the past seven years.

Chelsea did not deserve to go through on this showing and goalkeeper Kepa Arrizabalaga can be thanked after making a couple of world-class saves. Add to that Chelsea hacking the ball off their goalie twice and it was clear who should be going to Baku to face Arsenal one May 28.

Frankfurt had a great chance to score on four minutes when Kuka Jovic, rose, unchallenged for a header from a corner, that while goal-bound, went straight to Kepa Arrizabalaga.

Ruben Loftus-Cheek thought he had a good shout for a penalty on 10 minutes, when he was bundled over, but Romanian referee Ovidiu Hategan dismissed his plea.

Kepa, fresh from a wonder save at the weekend against Watford, repeated it again when he reacted spectacularly to a wonder right-footer volley from Danny da Costa. He somehow managed to tip over the 25-yard blaster which looked like it was about to ripple threw back of his net.

Frankfurt’s Makoto Hasebe was on the line to hack away David Luiz’s glancing header from a William free-kick as the Blues inched closer to breaking the deadlock on 23 minutes.

And it came five minutes later from in-form Ruben Loftus-Cheek, who latched onto a great through ball from Eden Hazard. The midfielder still had work to do as he entered the penalty area on the left, but he kept his cool, and slotted home a low, deft, right-footer that was beyond the grasp of Kevin Trapp and the ball drifted into the side-netting goalkeeper’s  net.

There were no changes by either side at half time other than a invigorated opposition, who failing to get a penalty on 47 minutes opted instead to equalise in the simplest of fashion by allowing Jovic to get between Luiz and Andreas Christensen and slot home a low right-footer past Kepa.

Olivier Giroud could have restored the lead for the Blues three minutes later, but after being set up by Hazard, the Frenchman screwed his effort wide of goal.

Quite how Chelsea survived the onslaught without conceding again is anybodies guess after Mijat Gacinovic let fly with a terrific shot which Kepa did well to simple punch away.

Head coach made his first change, bringing on Pedro for Willian on 62 minutes.

Christensen landed badly from an aerial challenge on 72 minutes and limped off the pitch to be replaced by full back Davide Zappacosta. Club captain Gary Cahill and specialist centre-back was left on the bench.

The Italian had a smart shot, that zipped across the slippery surface with 13 minutes left, Trapp scoping the ball away at the last moment.

A chorus of boos aimed at Sarri echoed round Stamford Bridge as Loftus-Cheek was replaced by Ross Barkley on 85 minutes.

Giroud tried his best to lifetime they gloom defending on the stadium with a drive that forced Traff into snaffling the long-range effort on the second attempt.

Gonzalo Higuain was introduced six minutes into extra-time for Giroud. But the  David Luiz hacked the ball off the line after substitute Sebastien Haller’s shot foxed Kepa.

That was the only effort by the Blues in the first period, while Haller saw his unchallenged header on the stroke of the ref’s whistle being headed off the line by Zappacosta.

A last-gasp tackle by Martin Hinteregger prevented Pedro from latching onto a loose ball, but he injured himself in then process.

Zappacosta was proving to be an attacking powerhouse as with six minutes left before penal;ties he produced another blockbuster of a right-footer. Trapp was also on form and tipped the venom is shot over the bar.

Azpilicueta and the crowd thought he had scored when his challenge on Trapp saw the goalie drop the ball, and it dipped off the Spain defender’s shoulder and over the line.

Hategan ruled that the Chelsea skipper has fouled the stopper.

And so out went to penalties.