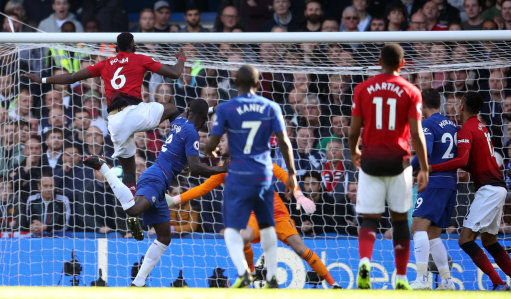 Ross Barkley scored a last-minute equaliser to spare Chelsea’s blushes as they seemed to be heading for defeat to Manchester United. The game ended 2-2  after the Blues took the lead before succumbing to a brace from Anthony Martial. Barkley’s last-gasp leveller then sparked a melee in the dug out as Jose Mourinho leapt from  his seat to chase down a Chelsea staffer who has whipped across to the United bench in celebration right in front of Mourinho.

The Ex-Chelsea boss was stopped by security staff and order was not restore for two minutes.

The aftermath, while taking centre-stage, could not mask how Chelsea had got out of jail with a point.

The visitors dominated the second half and had stifled Chelsea’s attacking flair.

Eden Hazard, So often the game-changer for Chelsea, proved that, when he has an off day, like today, it’s usually curtains for the west Londoners. But Barkley stepped up and crashed the ball home after Rudiger hit the post and the ball richolctd nick Ley for the substitute to crash the ball into the back of the United net

The opening stages were tentative, with both sides not wanting to make a mistake./ The Blues showed greater ambition and an inspired Eden Hazrad run saw him upended by Nemanja Matic on eight minutes. Up stepped Willian to take the die of the penalty area free kick, but it needed up w in row Z of the Shed stand. Ex-Blue Matic was soon in referee Miker Dean’s book with a yellow card for hauling down Hazard again on 13 minutes.

Chelsea took the deserved lead on 21 minutes. It was simplicity itself. A standard corner from William and Antonio Rudiger, who lost his marker – Paul Pogba, arrowed a powerful downward header past David De Gea.

Ashley Young was next in the book, for a late, angle smack on hazard on 27 minutes.

Dean was on fire now, Booking Rudiger for rashing into Pogba. And then Hazard, taking one for the team as Marcus Rashford raced clear.

The Blues had a great chance to double the lead seconds after the restart. Alvaro Morata picked up a through ball by Jorginho. Running into the United area, he took a touch before turning 2360 degrees and shot, but his left-footer, while on target, was weak and De Gea had no trouble snatching the ball at his near post.

Chelsea were terrible in defence and on 55 minutes United got their reward.

Firstly Juan Mata forced a fine save from Kepa Arrizabalaga, then in a space of three seconds, Marcos went sprawling onto the pitch. Then Luiz half cleared the ball before it was fired back into the six-yard box. The ball took a touch off Jorginho before Anthony Martial, standing beside the prone Marcos smashed the ball past Arrizabalaga’s to level the score.

Mata was next in Dean’s book fora scything challenge on Jorginho on 66 minutes.

N’Golo Kante, for much a peripheral figure, unleashed a fierce right footer that De Gea did brilliantly to parry away from goal.

A minute later on 73 minutes and United had turned the match around.

mata slipped past Luiz on the left, he passed the ball on two Rashford, who quickly knocked it onto martial. The France wiseman took one once, on the edge of the Chelsea penalty area before letting fly with a venomous, curling right-footer that left Arrizabalaga rooted to the spot as the ball arrowed wide of him and into the back of his net.

Pedro, who was about to come on, then did – William went off.

On 96 minutes the Blues got that equaliser through Barkley Burt all, the talk will be of Mourinho0 – to be fair, he would Benoit have it any other way.

Chelsea inability to score when on top hurt them deeply as they lost at home to Manchester United 2-1 after taking a first half lead.

A brace from Anthony Martial cancelled out Antonio Rudiger’s powerful header – he lashed inn the equaliser from close range before a smart counter-attack saw him stroke home a beautifully curling right0footer from the edge of the penalty area.

Chelsea boss Maurizio Sarri opted to start misfiring Alvaro Morata up front and that proved costly.Not even the option off and additional six minutes after the 90 helped.